From Infogalactic: the planetary knowledge core
(Redirected from Languages of the Northern Mariana Islands)
Jump to: navigation, search 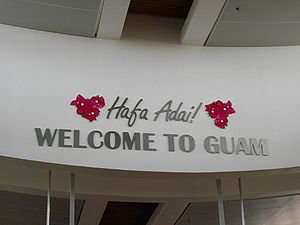 The Chamorro language is threatened, with a precipitous drop in language fluency over the past century. It is estimated that 75% of the population of Guam was literate in the Chamorro language around the time the United States captured the island during the Spanish–American War[4] (there are no similar language fluency estimates for other areas of the Mariana Islands during this time). A century later, the 2000 U.S. Census showed that fewer than 20% of Chamorros living in Guam speak their native language fluently and a vast majority were over the age of 55.

A number of forces have contributed to the steep, post-WWII decline of Chamorro language fluency. A colonial legacy, beginning with the Spanish colonization of Guam in 1668, imposed power structures privileging the language of the region's colonizers.

In Guam, the language suffered additional suppression when the U.S. Government banned Chamorro language in schools in 1922. They collected and burned all Chamorro dictionaries.[5] Similar policies were undertaken by the Japanese government when they controlled the region during WWII. And post WWII, when Guam was ceded back to the United States, the American administrators of the island continued to impose “no Chamorro” language restrictions in local schools, teaching only English and disciplining students for speaking their indigenous tongue.[6]

Even though these oppressive language policies were progressively lifted, the damage had been done. Subsequent generations were often raised in households where only the oldest family members were fluent. Lack of exposure made it increasingly difficult to pick up Chamorro as a second language. Within a few generations, English replaced Chamorro as the language of daily life.[citation needed]

There is a difference in the rate of Chamorro language fluency between Guam and the other Mariana Islands. On Guam (called Guåhan by Chamorro speakers, from the word guaha, meaning "have"; its English meaning is "We have" from the idea that they had everything they needed[7][8]) the number of native Chamorro speakers has dwindled in the last decade or so. In the Northern Mariana Islands, young Chamorros speak the language fluently. Chamorro is common among Chamorro households in the Northern Marianas, but fluency has greatly decreased among Guamanian Chamorros during the years of American rule in favor of American English, which is commonplace throughout the inhabited Marianas.

Representatives from Guam have unsuccessfully lobbied the United States to take action to promote and protect the language.[citation needed]

In 2013, "Guam will be instituting Public Law 31-45, which increases the teaching of the Chamorro language and culture in Guam schools," extending instruction to include grades 7–10.[9]

Other efforts have been made in recent times, most notably Chamorro immersion schools. One example is the Huråo Guåhan Academy, at the Chamorro Village in Hagåtña, GU. This program is led by Ann Marie Arceo and her husband, Ray Arceo. According to Huråo's official YouTube page, "Huråo Academy is one if not the first Chamoru Immersion Schools that focus on the teaching of Chamoru language and Self-identity on Guam. Huråo was founded as a non-profit in June 2005." [10] The academy has been praised by many for the continuity of the Chamoru language.

Other creative ways to incorporate and promote the Chamorro language have been found in the use of applications for smartphones, internet videos and television. From Chamorro dictionaries,[11] to the most recent "Speak Chamorro" app,[12] efforts are growing and expanding in ways to preserve and protect the Chamorro language and identity.

On YouTube, a popular Chamorro soap opera Siha[13] has received mostly positive feedback from native Chamorro speakers on its ability to weave dramatics, the Chamorro language, and island culture into an entertaining program. On TV, Nihi! Kids is a first-of-its-kind show, because it is targeted "for Guam’s nenis that aims to perpetuate Chamoru language and culture while encouraging environmental stewardship, healthy choices and character development."[14]

Unlike most of its neighbors, Chamorro is not classified as a Micronesian or Polynesian language. Rather, like Palauan, it constitutes a possibly independent branch of the Malayo-Polynesian language family. Its indigenous origins are thus somewhat obscure.

At the time the Spanish rule over Guam ended, it was thought that Chamorro was a semi-Creole language, with a substantial amount of the vocabulary of Spanish origin and beginning to have a high level of mutual intelligibility with Spanish. It is reported that even in the early 1920s Spanish was reported to be a living language in Guam for commercial transactions, but the use of Spanish and Chamorro was rapidly declining as a result of English pressure.

Spanish influences in the language exist due to three centuries of Spanish colonial rule. Many words in the Chamorro lexicon are of Latin etymological origin via Spanish, but their use conforms with indigenous grammatical structures. Furthermore, indigenous pronunciation has "nativized" most words of foreign origin that haven't conformed to the ways that indigenous speakers of the language are accustomed to making sounds. By some it may be considered a mixed language[15] under a historical point of view, even though it remains independent and unique. In his Chamorro Reference Grammar, Donald M. Topping states:

"The most notable influence on Chamorro language and culture came from the Spanish. ... There was wholesale borrowing of Spanish words and phrases into Chamorro, and there was even some borrowing from the Spanish sound system. But this borrowing was linguistically superficial. The bones of the Chamorro language remained intact. ... In virtually all cases of borrowing, Spanish words were forced to conform to the Chamorro sound system. ... While Spanish may have left a lasting mark on Chamorro vocabulary, as it did on many Philippine and South American languages, it had virtually no effect on Chamorro grammar. ... Japanese influence on Chamorro was much greater than that of German, but much less than Spanish. Once again, the linguistic influence was restricted exclusively to vocabulary items, many of which refer to manufactured objects...[16]

In contrast, in the essays found in Del español al chamorro. Lenguas en contacto en el Pacífico (2009), Dr. Rafael Rodríguez-Ponga — the Complutense-trained linguist and Secretary-General of Spain's Instituto Cervantes — refers to modern Chamorro as a "mixed language" of "Hispanic-Austronesian" origins, while estimating that approximately 50% of the Chamorro lexicon comes from the Spanish language and that the contribution of this language goes far beyond loanwords.

Rafael Rodríguez-Ponga considers Chamorro an Spanish-Austronesian or an Spanish-Austronesian mixed language or at least a language that has emerged from a process of contact and creolization on the island of Guam, since modern Chamorro is influenced in vocabulary, and it has in its grammar many elements of Spanish origin: verbs, articles, prepositions, numerals, conjunctions, etc.[17]

This process, which began in the 17th century and ended in the early 20th century, meant a profound change from the old Chamorro (paleo-Chamorro) to modern Chamorro (neo-Chamorro) in its grammar, phonology and vocabulary.[18]

Chamorro has 24 phonemes: 18 are consonants and 6 are vowels.

Chamorro has at least 6 vowels, which include:

Below is a chart of Chamorro consonants; all are unaspirated.

Additionally, some letter combinations in Chamoru sometimes represent single phonemes. For instance, "ci+[vowel]" and "ti+[vowel]" are both pronounced [ʃ], as in "hustisia" (justice) and the surname Concepcion.

The letter ⟨y⟩ is usually (though not always) pronounced more like dz (an approximation of the regional Spanish pronunciation of y as [dʒ]); it is also sometimes used to represent the same sound as the letter i by Guamanian speakers. The phonemes represented by ⟨n⟩ and ⟨ñ⟩ as well as ⟨a⟩ and ⟨å⟩ are not always distinguished in print. Thus the Guamanian place name spelled Yona is pronounced "Dzonia"/[dzoɲa], not *[jona] as might be expected. ⟨Ch⟩ is usually pronounced like ts rather than like English ch. Chamorro ⟨r⟩ is usually a flap [ɾ], like Spanish r between vowels, and a retroflex approximant [ɻ ], like English r, at the beginning of words.

Chamorro has geminate consonants which are written double (GG, DD, KK, MM, NGNG, PP, SS, TT), native diphthongs AI and AO, plus OI, OE, IA, IU, IE in loanwords; penultimate stress, except where marked otherwise, if marked at all in writing, usually with an acute accent, as in asút "blue" or dángkulo "big". Unstressed vowels are limited to /ə i u/, though they are often spelled A E O. Syllables may be consonant-vowel-consonant, as in che’lu "sibling", diskatga "unload", mamahlao "shy", or oppop "lie face down", gatus (old word for 100), Hagåtña (Capital of Guam); B, D, and G are not distinguished from P, T, and K in that position.[vague].

Chamorro is a VSO or verb–subject–object language — the default order is that verbs go first, then the subject, then object. Although being the default word order, it is not constrained as the word order can be very flexible and change to SVO (subject-verb-object), like English, if necessary to convey different types of relative clauses depending on context and stressing parts of what someone is trying to say or convey.

Chamorro is also an agglutinative language, grammatically allowing root words to be modified by a number of affixes. For example, masanganenñaihon "talked awhile (with/to)", passive marking prefix ma-, root verb sangan, referential suffix i "to" (forced morphophonemically to change to e) with excrescent consonant n, and suffix ñaihon "a short amount of time". Thus Masanganenñaihon gue' "He/she was told (something) for a while".

Chamorro has many Spanish loanwords and other words have Spanish etymological roots (e.g., tenda "shop/store" from Spanish tienda), which may lead some to mistakenly conclude that the language is a Spanish Creole: Chamorro very much uses its loanwords in a Micronesian way (e.g., bumobola "playing ball" from bola "ball, play ball" with verbalizing infix -um- and reduplication of first syllable of root).

Chamorro is predicate-initial, head-marking language. It has a rich agreement system in the nominal and in the verbal domains. The following table gives the possessor-noun agreement suffixes:[19]

Chamorro is also known for its wh-agreement in the verb: These agreement morphemes agree with features (roughly, the grammatical case feature) of the question phrase, and 'replace' the regular subject–verb agreement:[20]

'Who washed the car?'

Chamorro is studied at the University of Guam and in several academic institutions of Guam and the Northern Marianas.

Researchers in several countries are studying aspects of Chamorro. In 2009, the Chamorro Linguistics International Network (CHIN) was established in Bremen, Germany. CHiN was founded on occasion of the Chamorro Day (27 September 2009) which was part of the programme of the Festival of Languages. The foundation ceremony was attended by people from Germany, Guam, the Netherlands, New Zealand, Spain, Switzerland, and the United States of America.[25]