Latrobe /leɪˈtroʊb/ is a city in Westmoreland County, Pennsylvania in the United States and part of the Pittsburgh metropolitan area.

Among its claims to fame, Latrobe is the home of the Latrobe Brewery (the original brewer of Rolling Rock beer), Saint Vincent College, and golfer Arnold Palmer. It was the childhood home of Fred Rogers, children's television personality who was buried there in Unity Cemetery after his death in 2003. In addition, it is the birthplace of trumpeter Dennis Ferry. While it was believed for years that the first professional football game was played in Latrobe, the city's claim was refused induction into the Hall of Fame records.[1] Latrobe is also home of the first banana split, invented in Latrobe by David Strickler in 1904.[citation needed] Latrobe is home to the training camp of the six time Super Bowl champion, Pittsburgh Steelers.

In May 2006, Anheuser-Busch purchased the Rolling Rock brands, but not the brewery. In June 2006, City Brewing Company from La Crosse, Wisconsin entered into negotiations to buy the brewery.[2] In September 2006, City Brewing Company agreed to purchase the brewery,[3] and they licensed it to the Boston Beer Company in April 2007 as a satellite brewery to produce Samuel Adams beers.[4] Sam Adams production did not last long. The plant is currently brewing Iron City Beer under contract. In addition, Duquesne Bottling Company has brewed the revived Duquesne Beer, "The Prince of Pilseners", at the Latrobe plant.

In 1852, Oliver Barnes (a civil engineer for the Pennsylvania Railroad) laid out the plans for the community that was incorporated in 1854 as the Borough of Latrobe. Barnes named the town for his best friend and college classmate, Benjamin Latrobe, who was a civil engineer for the B&O Railroad. (His father, Benjamin Henry Latrobe, was the architect who rebuilt the United States Capitol in Washington, D.C. after the War of 1812.)

Its location along the route of the Pennsylvania Railroad helped Latrobe develop into a significant industrial hub. Latrobe was also served by the Ligonier Valley Railroad from 1877 to 1952.

In 1904, the banana split was invented in Latrobe by David Evans Strickler at Strickler's Drug Store.[5]

Latrobe has two sites on the National Register of Historic Places within its city boundaries:

From 1895 until 1909, Latrobe was the home of the Latrobe Athletic Association, one of the earliest professional football teams. The team's quarterback, John Brallier, became the first football player to admit playing for money. In 1895 he accepted $10 and expenses to play for Latrobe in a 12-0 victory over the Jeannette Athletic Club. Brallier was thought to be the very first professional football player, until the 1960s. It was then, that documents surfaced showing that William "Pudge" Heffelfinger, a former three-time All-American from Yale, was employed to play guard for the Allegheny Athletic Association three years earlier.[10] In 1897, Latrobe was the first football team to play a full season with a team composed entirely of professional players. In 1898 Latrobe and two players from their rivals, the Greensburg Athletic Association, formed the very first professional football all-star team for a game against the Duquesne Country and Athletic Club, to be played at Pittsburgh's Exposition Park. Duquesne went on to win the game 16-0.[11] On November 18, 1905, Latrobe defeated the Canton Bulldogs, which later became a founding member, and two-time champion, of the National Football League, 6-0.[12] 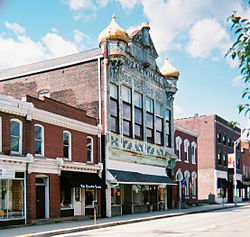 There were 3,786 households out of which 26.0% had children under the age of 18 living with them, 48.1% were married couples living together, 11.0% had a female householder with no husband present, and 38.0% were non-families. 34.1% of all households were made up of individuals and 17.9% had someone living alone who was 65 years of age or older. The average household size was 2.22 and the average family size was 2.86.

▪ Latrobe Brewing Company is on a sign in the background of a bar in the film "Gone Girl."

Latrobe is also mentioned on an episode of Quantum Leap as being the setting of character Arnold Watkins' (Tristan Tait) parents' final resting place. 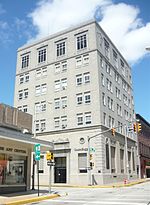