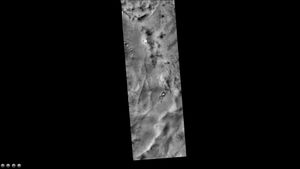 Lau Crater, as seen by CTX camera (on Mars Reconnaissance Orbiter). Curved ridges are probably eskers which formed under glaciers. 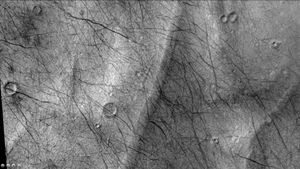 Close up of eskers in Lau Crater, as seen by CTX camera (on Mars Reconnaissance Orbiter). The dark lines are dust devil tracks. Note: this is an enlargement of the previous image of Lau Crater.

Lau Crater is an impact crater in the Mare Australe quadrangle of Mars, located at 74.4°S latitude and 107.8°W longitude. It is 104.9  km in diameter and was named after Hans E. Lau, and the name was approved in 1973 by the International Astronomical Union (IAU) Working Group for Planetary System Nomenclature (WGPSN).[1]

The curved ridges observed on the crater floor are believed to be eskers, which form when streams run under a glacier. These eskers would indicate a large, thick sheet of ice once covered this region.