From Infogalactic: the planetary knowledge core
Jump to: navigation, search
For other places with a similar name, see Lebanon (disambiguation).

All of the county falls within the 48th Pennsylvania Senatorial District. The seat is currently held by State Sen. Mike Folmer, a Republican.

The county is divided into the 101st and 102nd Pennsylvania House Districts.

The 101st District, served by Republican Mauree Gingrich, whose term expires in 2015, includes:

The 102nd District, served by Republican Russ Diamond, whose term expires in 2017, includes:

The county is governed by three commissioners, who are elected every four years from a slate of four candidates (two Democrats and two Republicans). Other elected officials include County Controller, Sheriff, Coroner, Prothonotary and Clerk of Court, Recorder of Deeds, County Treasurer, and Jury Commissioners.

The county has a history of being one of the most Republican counties in Pennsylvania. No Democratic Presidential candidate has won Lebanon County since 1936, when Franklin Delano Roosevelt won re-election in a landslide. Lebanon County was one of only four counties in the state to vote for Barry Goldwater in 1964, along with Snyder, Union, and Wayne counties. 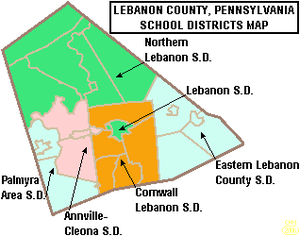 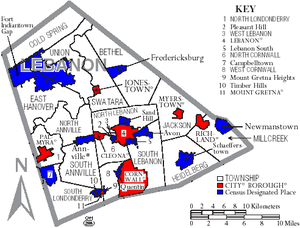 Under Pennsylvania law, there are four types of incorporated municipalities: cities, boroughs, townships, and, in at most two cases, towns. The following cities, boroughs and townships are located in Lebanon County: