Left-wing populism is a political ideology which combines left-wing politics and populist rhetoric and themes. The rhetoric often consists of anti-elitist sentiments, opposition to the system and speaking for the "common people".[1] Usually the important themes for left-wing populists include anti-capitalism, social justice, pacifism and anti-globalization, whereas class society ideology or socialist theory is not as important as it is to traditional left-wing parties.[2] The criticism of capitalism and globalization is linked to anti-Americanism which has increased in the left populist movements as a result of unpopular US military operations, especially those in the Middle East.[3]

It is considered that the populist left does not exclude others horizontally and relies on egalitarian ideals.[1] Some scholars point out nationalist left-wing populist movements as well, a feature exhibited by Kemalism in Turkey for instance.[4] For left-wing populist parties supportive of immigrant and LGBT rights among others, the term "inclusionary populism" has been used.[5]

With the rise of Greek Syriza and Spanish Podemos during the European debt crisis, there has been increased debate on new left-wing populism in Europe.[6][7]

Cristina Fernández de Kirchner, president of Argentina from 2007 to 2015, is often mentioned along with other Latin American left-wing populist leaders, such as Evo Morales and Hugo Chávez. During her time in office as president, she often engaged in criticism of the United States, gave speeches with anti-globalization overtones, and sought to form economic alliances with non-Western countries such as China and Russia, with some degree of success[citation needed]. She has also repeatedly spoken against capitalism in general.

Her administration was characterized by marked tax increases, especially on agricultural produce, Argentina's main export. In 2009, she instated the Universal allocation per child subsidy (commonly referred to as AUH in Argentina,Asignación Universal por Hijo), a means-tested benefit to families with children who qualified for the program (despite its name, the AUH is not a universal subsidy).

The leadership of Siles Zuazo practiced left-wing populism,[8] as well as that of incumbent president Evo Morales.[9] 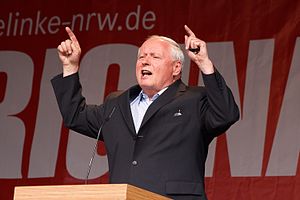 The Party of Democratic Socialism was explicitly studied under left-wing populism, especially by German academics.[11] The party was formed after the reunification of Germany and it was similar to right-wing populists in that it relied on anti-elitism and media attention provided by a charismatic leadership.[12] The party competed for the same voter base with the right-wing populists to some extent, although it relied on a more serious platform in Eastern Germany. This was limited by anti-immigration sentiments preferred by some voters, although the lines were for example crossed by Oskar Lafontaine, who used a term previously associated with the Nazi Party, Fremdarbeiter or alien workers, in his election campaign in 2005.[12] The PDS merged into the Left Party in 2007, and new populist elements are likely to find a more hospitable habitat on the left than on the right in Germany.[13]

Syriza, which became the largest party in the January 2015 elections, has been described as a left-wing populist party after their platform incorporated most demands of the popular movements in Greece during the government-debt crisis. Populist traits in Syriza's platform include growing importance of "the People" in their rhetoric and "us/the people against them/the establishment" antagonism in campaigning. On immigration and LGBT rights, Syzira is inclusionary. Syriza itself does not accept the label "populist".[14]

The Socialist Party has run a left-wing populist platform after dropping its communist course in 1991.[15] Although some have pointed out that the party has become less populist over the years, it still includes anti-elitism in its recent election manifestos.[16] It opposes what it sees as the European superstate.

The left-wing populist party Podemos achieved 8 percent of the national vote in the 2014 European Parliament election. Due to avoiding nativist language typical with right-wing populists, Podemos is able to attract all leftist voters disappointed with the political establishment without taking sides in the regional political struggle.[17]At the elections for the national parliament on December 20, Podemos reached 20.65 % of the vote and became the third largest party in the parliament after the the conservative People's Party with 28.71 % and the Spanish Socialist Workers' Party with 22.02 %. In the new parliament Podemos will hold 69 out of 350 seats. This result ended the traditional two party system of Spain.[18]

The presidency of Hugo Chávez resembled a combination of folk wisdom and charismatic leadership with doctrinaire socialism.[9] Chávez's regime was also described to have been a "throwback" to populist nationalism and redistributivism.[19]