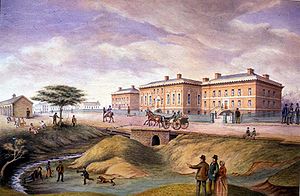 The It was the elected part of the legislature for the province of Upper Canada, functioning as the lower house in the Parliament of Upper Canada. Its legislative power was subject to veto by the appointed Lieutenant Governor, Executive Council, and Legislative Council.

The first elections in Upper Canada, in which only land-owning males were permitted to vote, were held in August 1792. The first session of the Assembly's sixteen members occurred in Newark, Upper Canada on 17 September 1792. Shortly before the capital of Upper Canada was moved to York in 1796 the Assembly was dissolved and reconvened for twelve more sessions between 1797 to 1840 in modest buildings in the new capital. Members continued to be elected by land-owning males to represent counties and the larger towns.

During the War of 1812, American troops set fire to the buildings of the Assembly.

Following the war, the Executive and Legislative Councils became increasingly dominated by the Family Compact, a clique of wealthy individuals led primarily by John Strachan (a member of the powerful Executive Council of Upper Canada) and emerged in 1815. The Compact was deeply opposed to American republicanism and favoured full establishment for the Anglican church in Upper Canada. Their increasingly authoritarian style of governance and disregard for the will of the Legislative Assembly led to demands for government that was more responsible to the people and eventually the Upper Canada Rebellion of 1837. Opposing the Family Compact were initially an assortment of anti-establishment members, but it did not gain strength until a more formal group of reformers emerged, initially led by William Warren Baldwin starting 1820s and then by William Lyon Mackenzie in the 1830s.

The 1840 Act of Union united Upper and Lower Canada into the single Province of Canada and, from this point until Confederation in 1867, a joint parliament was held for the united provinces.

A few members of the Legislature eventually left Canada. Some left Canada to join the United States Army during the War of 1812. Some were involved in the Rebellion of 1837 and other just simply abandoned Canada. Most moved to the United States, some left for Great Britain.

From 1824 to 1832, the Assembly sat at temporary locations due to the fire that destroyed the 2nd home:

Only Navy Hall survives today, all the other buildings were either demolished or burned down.