Lenox is a town in Berkshire County, Massachusetts, United States. Set in Western Massachusetts, it is part of the Pittsfield Metropolitan Statistical Area. The population was 5,025 at the 2010 census.[1] Lenox is the site of Tanglewood, summer home of the Boston Symphony Orchestra. Lenox includes the villages of New Lenox and Lenoxdale, and is a tourist destination during the summer.

The area was inhabited by Mahicans, Algonquin speakers who largely lived along the Hudson and Housatonic Rivers.[2] Hostilities during the French and Indian Wars discouraged settlement by European colonial settlers until 1750, when Jonathan and Sarah Hinsdale from Hartford, Connecticut, established a small inn and general store. The Province of Massachusetts Bay thereupon auctioned large tracts of land for 10 townships in Berkshire County, set off in 1761 from Hampshire County.

For 2,250 pounds Josiah Dean purchased Lot Number 8, which included present-day Lenox and Richmond. After conflicting land claims were resolved, however, it went to Samuel Brown, Jr., who had bought the land from the Mahican chief, on condition that he pay 650 pounds extra.[citation needed] It was founded as Richmond in 1765. But because the Berkshires divided the town in two, the village of Yokuntown (named for an indigenous chief) was set off as Lenox in 1767. The town was intended to be called Lennox, probably after Charles Lennox, 3rd Duke of Richmond and Lennox (Scottish Gaelic Leamhnachd), but the name was misspelled by a clerk at incorporation.

Early industries included farming, sawmills, textile mills, potash production, glassworks, and quarrying. A vein of iron ore led to the digging of mines under the town, and the establishment by Job Gilbert in the 1780s of an iron works at Lenox Dale, also known as Lenox Furnace. In 1784, Lenox became county seat, which it remained until 1868 when the title passed to Pittsfield. The county courthouse built in 1816 is today the Lenox Library.

The region's rustic beauty helped Lenox develop into an art colony. In 1821, author Catharine Sedgwick moved here, followed by actress Fanny Kemble. Nathaniel Hawthorne and his family came from Salem in 1850,[3] staying a year and a half. Other visitors to the area, including Timothy Dwight, Benjamin Silliman and Henry Ward Beecher, extolled its advantages. After an extension of the Housatonic Railroad arrived in 1838, tourists discovered the town in increasing numbers.

In 1844, Samuel Gray Ward of Boston, the American representative for Barings Bank of London, assembled tracts of land to create the first estate in Lenox. Called Highwood, the Italianate dwelling was designed in 1845 by Richard Upjohn. In 1876, Ward hired Charles F. McKim to design in the Shingle Style another property, Oakwood. The period from 1880 until 1920 would be dubbed the Berkshire Cottage era, when the small New England town was transformed into a Gilded Age resort similar to Newport, Rhode Island, and Bar Harbor, Maine. The wealthy and their entourage opened immense houses for recreation and entertaining during the Berkshire Season, which lasted from late summer until early fall. One event was the annual Tub Parade, when Main Street was lined with ornately decorated carriages. Property values jumped as millionaires competed for land on which to build showplaces. In 1903, an acre in Lenox cost $20,000, when an acre in nearby towns cost a few dollars.

The imposition of the federal income tax in 1913 ended construction of the country mansions in the Berkshires. The estates started to break up during the 1920s. Carnegie's widow sold Shadowbrook to the Jesuits for a seminary in 1922. The Depression made it harder to maintain the estates, and labor was scarce during World War II. After the war, some of the estates were torn or burned down. Others became schools or seminaries. Some estates became preparatory schools, although they would close by the 1970s and 1980s.

The Shadowbrook property is now the Kripalu yoga center; another, The Mount, is the former home of Shakespeare & Company. Some have been converted into vacation condominiums. Tanglewood, the former estate of the Tappan family which lies partially in Stockbridge, would in 1937 become summer home to the Boston Symphony Orchestra. Lenox remains a popular tourist destination. It was a filming location for Before and After (1996) and The Cider House Rules (1999), which was shot at Ventfort Hall.

Lenox is set apart from Richmond to the west by a branch of the Berkshire Mountains, with the highest peak in the ridge being Yokun Seat at 2,146 feet (654 m). To the east, October Mountain rises above the Housatonic River, which flows along that side of town and is impeded by a dam that forms Woods Pond. Contamination with PCBs is highest in the section of the River from Pittsfield to Woods Pond.[4] Parts of the Housatonic Valley Wildlife Management Area and October Mountain State Forest line the river's east banks there. Several marshy brooks also feed into the river throughout town. The town is also home to the Pleasant Valley Wildlife Sanctuary south of Yokun Seat, and the Cranwell Resort and Golf Club.

U.S. Routes 7 and 20 meet in the southern end of town, heading north along a bypass road towards Pittsfield. Massachusetts Route 7A, the original path of Route 7, passes through the center of town, with a short distance combined with Massachusetts Route 183, which begins near the start of the bypass road. The town center is 5 miles (8 km) from Exit 2 of the Massachusetts Turnpike (Interstate 90), the nearest interstate highway.

Along the Housatonic, the main rail line between Pittsfield and Great Barrington passes from north to south. Rail service can be found in Pittsfield, and the town is served by the Berkshire Regional Transit Authority (BRTA), with regional service through Pittsfield. Pittsfield is also the site of the nearest regional airport, the Pittsfield Municipal Airport. The town is roughly equidistantly located between the two nearest airports with national flights, Albany International Airport in New York and Bradley International Airport in Connecticut. 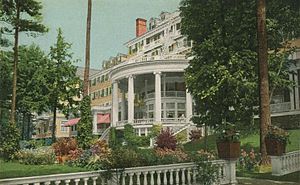 Hotel Aspinwall in 1912, now the site of Kennedy Park 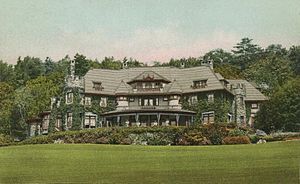 Lenox employs the open town meeting form of government, and is governed by a board of selectmen and a town manager. The town has its own full-time police, fire, ambulance, and public works departments. The Lenox Library, founded in 1856, has occupied the former county courthouse since 1874. It is a member of the regional library network. The nearest hospital, Berkshire Medical Center, is located in Pittsfield.

Lenox operates its own school system for the town's 800 students. It is the only town in the county whose schools do not have a formal tuition agreement with any other town (other students may attend, however). Morris Elementary School houses students from pre-kindergarten through fifth grade, and Lenox Memorial Middle and High School houses students through twelfth grade. The school's athletic teams are called the "Millionaires", in acknowledgement of the town's history, and their colors are maroon and gold. The school's longtime rivals are the Lee Wildcats. Additionally, Lenox is home to two special education schools (Valleycrest School and the Hillcrest Center), as well as private schools, Berkshire Christian, which serves students from pre-kindergarten through grade 8, Berkshire Country Day School, which serves students from pre-kindergarten through ninth grade, and The Montessori School of the Berkshires, which serves toddlers through middle school students.

The nearest community college is Berkshire Community College in Pittsfield. The nearest state colleges are Massachusetts College of Liberal Arts in North Adams, and Westfield State University. The nearest private college is Bard College at Simon's Rock in Great Barrington. 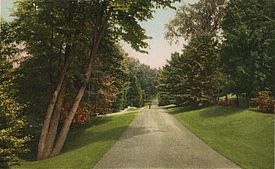 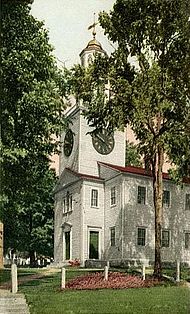