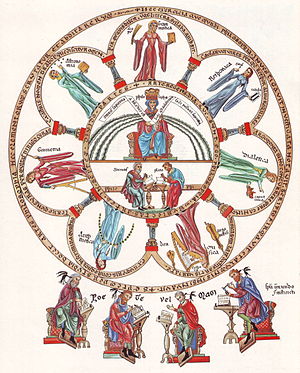 The liberal arts (Latin: artes liberales) are those subjects or skills that in classical antiquity were considered essential for a free person (Latin: liberal, "worthy of a free person")[1] to know in order to take an active part in civic life, something that (for Ancient Greece) included participating in public debate, defending oneself in court, serving on juries, and most importantly, military service. Grammar, logic, and rhetoric were the core liberal arts, while arithmetic, geometry, the theory of music, and astronomy also played a (somewhat lesser) part in education.[2]

In modern times, liberal arts education is a term that can be interpreted in different ways. It can refer to certain areas of literature, languages, art history, music history, philosophy, history, mathematics, psychology, and science.[3] It can also refer to studies on a liberal arts degree program. For example, Harvard University offers a Master of Liberal Arts degree, which covers biological and social sciences as well as the humanities.[4] For both interpretations, the term generally refers to matters not relating to the professional, vocational, or technical curriculum. 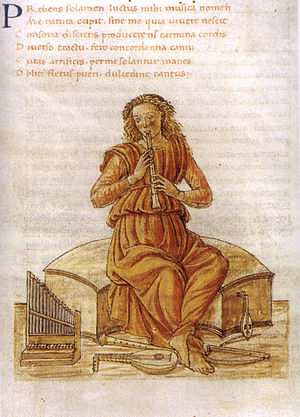 Page from Marriage of Mercury and Philology

Rooted in the basic curriculum – the enkuklios paideia or "education in a circle" – of late Classical and Hellenistic Greece, the "liberal arts" or "liberal pursuits" (Latin liberalia studia) were already so called in formal education during the Roman Empire: thus Seneca the Younger discusses liberal arts in education from a critical Stoic point of view in Moral Epistle 88.[5] The exact classification of the liberal arts varied however in Roman times,[6] and it was only after Martianus Capella in the 5th century AD influentially brought the seven liberal arts as bridesmaids to the Marriage of Mercury and Philology,[7] that they took on canonical form.

The four 'scientific' artes – music, arithmetic, geometry and astronomy (or astrology) – were known from the time of Boethius onwards as the Quadrivium. After the 9th century, the remaining three arts of the 'humanities' – grammar, logic, and rhetoric – were classed as well as the Trivium.[6] It was in that two-fold form that the seven liberal arts were studied in the medieval Western university.[8][9] During the Middle Ages, logic gradually came to take predominance over the other parts of the Trivium.[10]

In the Renaissance, the Italian humanists and their Northern counterparts, despite in many respects continuing the traditions of the Middle Ages, reversed that process.[11] Re-christening the old Trivium with a new and more ambitious name: Studia humanitatis, and also increasing its scope, they downplayed logic as opposed to the traditional Latin grammar and rhetoric, and added to them history, Greek, and moral philosophy (ethics), with a new emphasis on poetry as well.[12] The educational curriculum of humanism spread throughout Europe during the sixteenth century and became the educational foundation for the schooling of European elites, the functionaries of political administration, the clergy of the various legally recognized churches, and the learned professions of law and medicine.[13] The ideal of a liberal arts, or humanistic education grounded in classical languages and literature, persisted until the middle of the twentieth century.

Some subsections of the liberal arts are in the trivium—the verbal arts: grammar, logic, and rhetoric; and in the quadrivium—the numerical arts: arithmetic, geometry, music, and astronomy. Analyzing and interpreting information is also included.

Academic areas that can be associated with the term liberal arts include:

Some liberal arts education provide general education, others have a specific focus. (This also differs from country to country.) The four traditional branches are:

Today, a number of other areas of specialization exist, such as gymnasiums specializing in economics, technology or domestic sciences. In some countries, there is a notion of progymnasium, which is equivalent to beginning classes of the full gymnasium, with the rights to continue education in a gymnasium. Here, the prefix "pro" indicates that this curriculum precedes normal gymnasium studies.

In the United States, liberal arts colleges are schools emphasizing undergraduate study in the liberal arts.[17] The teaching at liberal arts colleges is often Socratic, typically with small classes, and often has a lower student-to-teacher ratio than at large universities; professors teaching classes are allowed to concentrate more on their teaching responsibilities than primary research professors or graduate student teaching assistants in universities.[citation needed]

In addition, most four-year colleges that are not devoted exclusively or primarily to liberal arts degrees also offer those degrees, and students not majoring in liberal arts take courses to satisfy distribution requirements in liberal arts.

Traditionally, a bachelor's degree either in liberal arts in general or in one particular area within liberal arts, with substantial study outside that main area, is earned over four years of full-time study. However, some universities such as Saint Leo University,[18] Pennsylvania State University,[19] Florida Institute of Technology[20] and New England College[21] have begun to offer an associate degree in liberal arts.

Most students earn either a Bachelor of Arts degree or a Bachelor of Science[22] degree; on completing undergraduate study, students might progress to either a liberal arts graduate school or a professional school (public administration, engineering, business, law, medicine, theology).

In most parts of Europe, liberal arts education is deeply rooted. In Germany, Austria and countries influenced by their education system, e.g. it is called "humanistische Bildung" (humanistic education). The term is not to be mixed up with some modern educational concepts that use a similar wording. Educational institutions that see themselves in that tradition are often a "Gymnasium" (high school, grammar school). They aim at providing their pupils with comprehensive education (Bildung) in order to form personality with regard to a pupil's own humanity as well as his/her innate intellectual skills. Going back to the long tradition of the liberal arts in Europe, education in the above sense was freed from scholastic thinking and re-shaped by the theorists of enlightenment. In particular, Wilhelm von Humboldt played a key role in that regard. Since students are considered to have received a comprehensive liberal arts education at grammar schools, very often, the role of liberal arts education in undergraduate education at universities is reduced compared to the US educational system. Students are expected to use their skills received at the grammar school in order to further develop their personality in their own responsibility, e.g. in universities' music clubs, theater groups, language clubs etc. Universities encourage students to do so and offer respective opportunities, but do not make such activities part of the university's curriculum.

In France, Chavagnes Studium, a Liberal Arts Study Centre in partnership with the Institut catholique d'études supérieures, and based in a former Catholic seminary, is launching a 2-year intensive BA in the Liberal Arts, with a distinctively Catholic outlook.[37]

Habib University in Karachi, Pakistan offers a holistic liberal arts and sciences experience to its students through its uniquely tailored liberal core program which is compulsory for all undergraduate degree students.[38][39] Flame University, Pune, India is one of the best in Asia[40] The Underwood International College of Yonsei University, Korea, has compulsory liberal arts course for all the student body. Ashoka University in Gurgaon, New Delhi is one such liberal arts college in India.

Campion College is a Roman Catholic dedicated liberal arts college, located in the western suburbs of Sydney. Founded in 2006, it is the first tertiary educational liberal arts college of its type in Australia. Campion offers a Bachelor of Arts in the Liberal Arts as its sole undergraduate degree. The key disciplines studied are history, literature, philosophy, and theology.