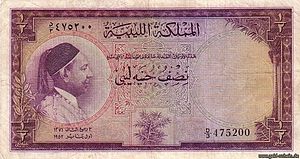 Libyan half pound, with the portrait of King Idris of Libya

When Libya was a part of the Ottoman Empire, the country used the Ottoman qirsh (XOTP), issuing some coins locally until 1844. When Italy took over the country in 1911, the Italian lira was introduced. In 1943, Libya was split into French and British mandate territories. Algerian francs were used in the French mandate, whilst Tripolitanian lira issued by the British Military Authorities were used in the British mandate.