Liebig's law of the minimum

This concept was originally applied to plant or crop growth, where it was found that increasing the amount of plentiful nutrients did not increase plant growth. Only by increasing the amount of the limiting nutrient (the one most scarce in relation to "need") was the growth of a plant or crop improved. This principle can be summed up in the aphorism, "The availability of the most abundant nutrient in the soil is only as good as the availability of the least abundant nutrient in the soil." Or, to put it more plainly, "A chain is only as strong as its weakest link." 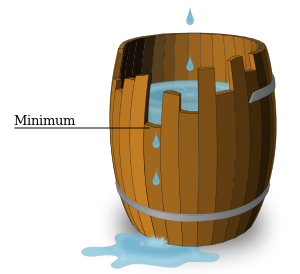 Liebig's Law has been extended to biological populations (and is commonly used in ecosystem models). For example, the growth of an organism such as a plant may be dependent on a number of different factors, such as sunlight or mineral nutrients (e.g. nitrate or phosphate). The availability of these may vary, such that at any given time one is more limiting than the others. Liebig's Law states that growth only occurs at the rate permitted by the most limiting.[2]

For instance, in the equation below, the growth of population

The use of the equation is limited to a situation where there are steady state conditions, and factor interactions are tightly controlled.

Neoclassical economic theory has sought to refute the issue of resource scarcity by application of the law of substitutability and technological innovation. The substitutability 'law' states that as one resource is exhausted — and prices rise due to a lack of surplus — new markets based on alternative resources appear at certain prices in order to satisfy demand. Technological innovation implies that humans are able to use technology to fill the gaps in situations where resources are imperfectly substitutable.

A market-based theory depends on proper pricing. Where resources such as clean air and water are not accounted for, there will be a "market failure". These failures may be addressed with Pigovian taxes and subsidies, such as a carbon tax.

While the theory of the law of substitutability is a useful "rule of thumb", some resources may be so fundamental that there exist no substitutes. For example, Isaac Asimov noted:

We may be able to substitute nuclear power for coal power, and plastics for wood... but for phosphorus there is neither substitute nor replacement.

Where no substitutes exist, such as phosphorus, recycling will be necessary. This may require careful long-term planning and government intervention, in part to create Pigovian taxes to allow efficient market allocation of resources, in part to address other market failures such as excessive time discounting.

One example of technological innovation is in plant genetics whereby the biological characteristics of species can be changed by employing genetic modification to alter biological dependence on the most limiting resource. Biotechnological innovations are thus able to extend the limits for growth in species by an increment until a new limiting factor is established, which can then be challenged through technological innovation. Theoretically there is no limit to the number of possible increments towards an unknown productivity limit.[3] This would be either the point where the increment to be advanced is so small it cannot be justified economically or where technology meets an invulnerable natural barrier. It may be worth adding that biotechnology itself is totally dependent on external sources of natural capital.