For general information on the rank of lieutenant, including army and air force use, see Lieutenant.

Lieutenant[nb 1] (abbreviated Lt, LT, LT(N), Lieut and LEUT, depending on nation) is a commissioned officer rank in many nations' navies. It is typically the most senior of junior officer ranks. The rank's insignia usually consists of two medium gold braid stripes and often the uppermost stripe features a loop or executive curl.

The now immediately senior rank of lieutenant commander was formerly a senior naval lieutenant rank. Many navies also use a subordinate rank of sub-lieutenant. The appointment of "first lieutenant" in many navies is held by a senior lieutenant.

From at least 1580,[1] the lieutenant on a ship had been the officer immediately subordinate to the captain. Before the English Restoration, lieutenants were appointed by their captains, and this inevitably led to abuses and to the widespread appointment of men of insufficient qualification. In 1677, Samuel Pepys introduced the first examination for lieutenant,[2] and it is from the date of this examination that their seniority was set.

Lieutenants were numbered by their seniority within the ship, so that a frigate (which was entitled to three) would have a first lieutenant, a second lieutenant, and a third lieutenant. A first-rate ship was entitled to six, and they were numbered accordingly. At first, a lieutenant's commission was given only for the ship in which he served, but with policy changes after the loss of HMS Wager in 1741 and the subsequent mutiny, lieutenants were given full commissions upon passing their examination.[1]

During the early days of the naval rank, some lieutenants could be very junior indeed, while others could be on the cusp of promotion to captain; those lieutenants ranged across modern army ranks from second lieutenant through lieutenant colonel. As the rank structure of navies stabilised, and the ranks of commander, lieutenant commander and sub-lieutenant were introduced, the naval lieutenant today ranks with an army captain (NATO OF-2 or US O-3).

In the United States Navy, promotion to lieutenant is governed by Department of Defense policies derived from the Defense Officer Personnel Management Act of 1980. DOPMA guidelines suggest 95% of lieutenants (junior grade) should be promoted to lieutenant after serving a minimum of two years at their present rank. 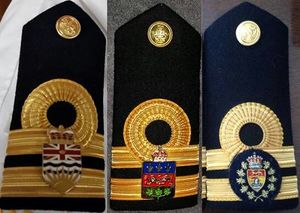 The insignia of a lieutenant in many navies, including the Royal Navy,[3] consists of two medium gold braid stripes (top stripe with loop) on a navy blue or black background. This pattern was copied by the United States Navy and various air forces for their equivalent ranks grades, except that the loop is removed. (see flight lieutenant).