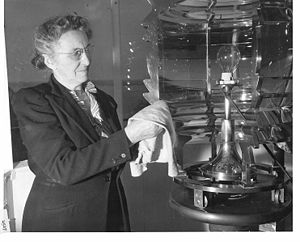 Mrs. Fanny May Salter, a lighthouse keeper in the United States Coast Guard service, polishes the lens in the Turkey Point Light, Maryland.

A lighthouse keeper is the person responsible for tending and caring for a lighthouse, particularly the light and lens in the days when oil lamps and clockwork mechanisms were used.

Lighthouse keepers were needed to trim the wicks, replenish fuel, wind clockworks and perform maintenance tasks such as cleaning lenses and windows. Electrification and other automated improvements such as remote monitoring and automatic bulb changing made paid keepers resident at the lights unnecessary. The earliest record of a named individual in a formal capacity as a lighthouse keeper was William, a member of the now famous Knott family, who was appointed to the South Foreland lighthouse near Dover, Kent, UK in 1730.[1] In the US, periodic maintenance of the lights is now performed by visiting Coast Guard Aids to Navigation teams.

The last manned lighthouse in Australia was Sugarloaf Point Lighthouse, where the last keeper left in 2006.[2]

The last manned lighthouse in Finland was deserted in 1987.[4]

All French lighthouses are automated, though a few are still manned.[5]

The last lighthouse keeper in Iceland was terminated in 2010.[6]

Baily Lighthouse was the last Irish lighthouse to be unmanned, in 1997.[7]

In 2006 Meshima Lighthouse became the last lighthouse in Japan to become automated.[9]

As of 2011, there are two manned lighthouses in the Netherlands, one at Schiermonnikoog and the other at Terschelling.[10][11]

All lighthouses in New Zealand have been automated since 1990.[12]

The last Norwegian lighthouse keeper moved out of Runde Lighthouse in 2002.[13]

The last manned lighthouse in the United Kingdom, the North Foreland Lighthouse, was automated in 1998.[14]

The last civilian keeper in the United States, Frank Schubert, died in 2003. The last officially manned lighthouse, Boston Light, was manned by the Coast Guard until 1998. It now has volunteer "keepers" whose primary role is to serve as interpretive tour guides for visitors.[15]

To recognize the role of Lighthouse keepers in the nation's maritime safety, the US Coast Guard named a class of 175-foot (53 m) USCG Coastal Buoy Tenders after famous US Lighthouse Keepers. Fourteen ships in the "Keeper" class were built between 1996 and 2000 and are used to maintain aids to navigation, including lighthouses.[16] The following 175-foot (53 m) WLMs are in service as of 2006: