Link is a rock outcrop on the surface of Aeolis Palus, between Peace Vallis and Aeolis Mons ("Mount Sharp"), in Gale crater on the planet Mars.[1][2][3] The outcrop was encountered by the Curiosity rover on the way from Bradbury Landing to Glenelg Intrique on September 2, 2012 (the 27th sol of the mission), and was named after a significant rock formation (and lake) in the Northwest Territories of Canada.[4] The "approximate" site coordinates are: Lua error in Module:Coordinates at line 668: callParserFunction: function "#coordinates" was not found.. 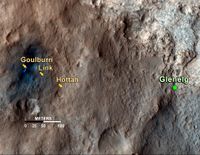 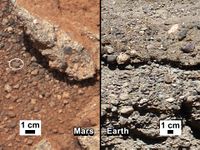 The sedimentology of "Link" (left) is strikingly similar to a terrestrial fluvial conglomerate (right).

The outcrop is a well-sorted gravel conglomerate, containing well-rounded, smooth, abraded pebbles. Pebbles and gravel a few millimeters to centimeters across are embedded in amongst a finer, white matrix. This outcrop geology is strikingly similar to some terrestrial fluvial conglomerates.[5] Around the rock are scattered well sorted loose gravel around 1 cm across, which are thought to be weathering out of the outcrop.

The rock has been interpreted as a cemented fluvial sediment, deposited by a "vigorously" flowing stream, probably between ankle and waist deep. This stream is part of an ancient alluvial fan, which descends from the steep terrain at the rim of Gale crater across its floor.[2]