A Mars-crosser is an asteroid whose orbit crosses that of Mars. The known numbered Mars-crossers are listed here. They include the two numbered Mars trojans 5261 Eureka and (101429) 1998 VF31.

Many databases, for instance the JPL Small-Body Database (JPL SBDB), only list asteroids with a perihelion greater than 1.3 AU as Mars-crossers. An asteroid with a perihelion less than this is classed as a near-Earth object even though it is crossing the orbit of Mars as well as crossing (or coming near to) that of Earth. Nevertheless, these objects are listed on this page. A grazer is an object with a perihelion below the aphelion of Mars (1.67 AU) but above the Martian perihelion (1.38 AU).[1] The JPL SBDB lists 13,500 Mars-crossing asteroids (MCAs). Only 18 MCAs are brighter than absolute magnitude (H) 12.5,[2] which typically makes these asteroids with H<12.5 more than 13 km in diameter depending on the albedo. The smallest known MCAs have an absolute magnitude (H) of around 24 and are typically less than 100 meters in diameter. 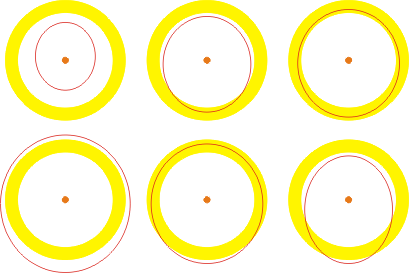 Inner grazers that are also Earth-crossers or grazers

These objects are not catalogued as Mars-crossers in databases such as the Jet Propulsion Laboratory's online Small-body Database Browser. Instead, they are categorized as Near Earth Objects (NEOs).