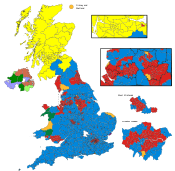 The 2015 constituencies showing the final results.

Primary legislation provides for the independence of the Boundary Commissions for each of the four parts of the UK, the number of seats for each of the countries, permissible factors to use in departing from any old boundaries and a strong duty to consult. For the 2013 review this is primarily the Parliamentary Voting System and Constituencies Act 2011. The Sainte-Laguë formula method is used to form groups of seats split between the four parts of the United Kingdom and the English Regions (as defined by EU Parliament Elections).[6]

The electorate figures given in the second column of the tables below are those used by the Commissions during their reviews. These electorate figures date from the start of the review in each country: England, February 2000;[7] Scotland, June 2001; Wales, December 2002; and Northern Ireland, May 2003. Of the 650 seats listed below, 533 are in England, 59 in Scotland, 40 in Wales and 18 in Northern Ireland.

Constituencies in the United Kingdom

Summary of fundamental boundary changes for the 2010 general election

Updated electorate figures from December 2010 have been added for the English,[8] Northern Irish,[9] Scottish[10] and Welsh[11] constituencies.