Squadrons and their history are listed in the Dictionary of American Naval Aviation Squadrons (DANAS). 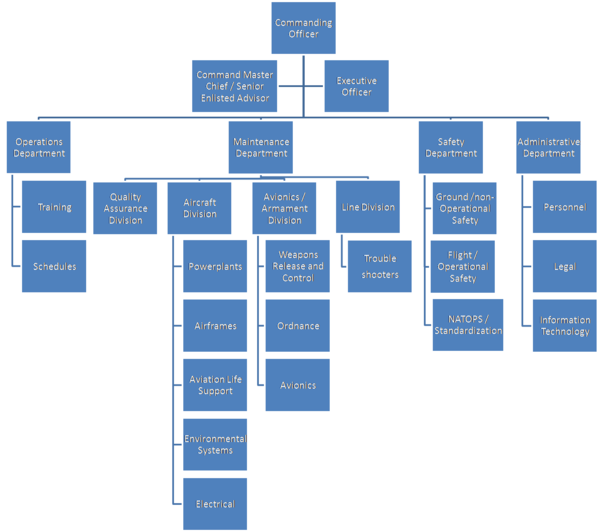 Navy squadron organizational chart. (Click the diagram to enlarge it)

Squadrons can be categorized in a number of ways: Active versus Navy Reserve, land-based versus sea-based, fixed wing versus rotary wing (helicopter) vs Unmanned aerial vehicle (UAV), and by mission. Unlike the USAF, US Army, and USMC, the US Navy does not typically refer to other organizations (such as maintenance or medical units) as "squadrons". An exception to this is that US Navy destroyers and submarines are administratively grouped by "squadrons".

Squadrons are listed here by type (fixed/rotary wing) and by mission.

Navy aircraft squadrons can be properly referred to by three different names. The names can give an indication of the squadron's mission and type of aircraft.

Most Navy fixed wing squadron informal names start with the letter "V". An exception to this was the use of "RVAH" to denote Reconnaissance Attack Squadrons which operated the RA-5C Vigilante during the 1960s and 1970s. 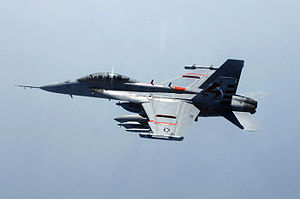 Prior to 1998 VAQ squadrons were called "Tactical Electronic Warfare" squadrons. A typical Electronic Attack Squadron consists of five Boeing EA-18G Growlers. The primary mission of the Growler is Electronic Attack (EA), also known as Suppression of Enemy Air Defenses (SEAD) in support of strike aircraft and ground troops by interrupting enemy electronic activity and obtaining tactical electronic intelligence within the combat area. Navy Electronic Attack squadrons carry the letters VAQ (V-fixed wing, A-attack, Q-electronic). Most VAQ squadrons are carrier based, however a number are "expeditionary", deploying to overseas land bases. When not deployed (either on land or carrier), they are home-ported at NAS Whidbey Island. The exception is VAQ-141, which is forward deployed to NAF Atsugi, Japan.[1]

Each Carrier Airborne Early Warning squadron consists of four E-2C Hawkeyes except for the FRS which has more. Transition to the E-2D Hawkeye is in progress and should be complete by 2025. The Hawkeye's primary mission is to provide all-weather airborne early warning, airborne battle management and command and control (C2) functions for the carrier strike group and Joint Force Commander. Additional missions include surface surveillance coordination, air interdiction, offensive and defensive counter air control, close air support coordination, time critical strike coordination, search and rescue airborne coordination and communications relay. The E-2 Hawkeye and C-2 Greyhound are built on the same airframe and have many similar characteristics. For this reason, both aircraft are trained for in the same Fleet Replacement Squadron.[3] 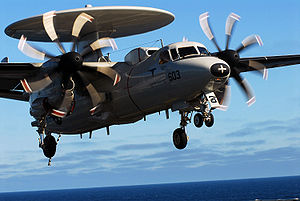 A Strike Fighter Squadron consists of either ten F/A-18C Hornets, twelve F/A-18E/F Super Hornets, and in future, ten F-35C Lightning IIs.[4][5] Training squadrons (known as fleet replacement squadrons) have many more aircraft. The Hornet is an all-weather aircraft that is used for attack and fighter missions. In its fighter mode, the F/A-18 is used primarily as a fighter escort and for fleet air defense; in its attack mode, it is used for force projection, interdiction and close and deep air support. The F/A-18 is also used for SEAD and aerial refueling.[6] The F-35C is a fifth-generation strike fighter that is replacing the Navy's F/A-18 Hornets and will serve alongside the Super Hornet. 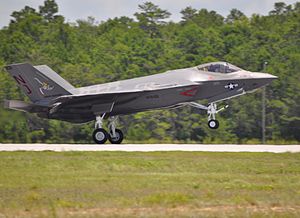 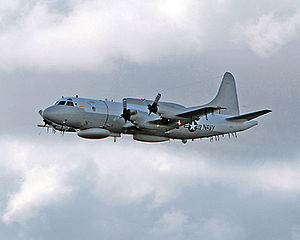 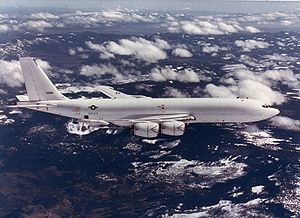 Fleet Air Reconnaissance Squadron ONE is the Navy's only land-based signals intelligence (SIGINT) reconnaissance squadron. The 13 aircraft in the Navy's inventory are based on the Orion P-3 airframe and provide fleet and theater commanders worldwide with near real-time tactical SIGINT. With sensitive receivers and high-gain dish antennas, the EP-3E exploits a wide range of electronic emissions from deep within targeted territory.

Fleet Air Reconnaissance Squadron SEVEN is the E-6B Fleet Replacement Squadron, providing initial and requalification training for pilots, aircrews, and maintainers. It operates E-6B's on loan from VQ-3 and VQ-4, having returned its leased Lauda Air 737-600. 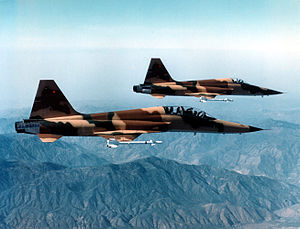 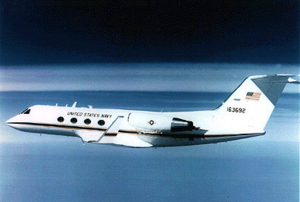 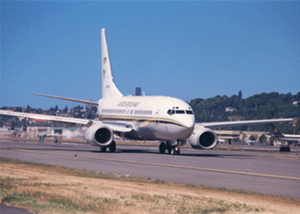 Fleet Logistics Support squadrons operate Navy unique airlift aircraft on a worldwide basis to provide responsive, flexible, and rapidly deployable air logistics support required to sustain combat operations from the sea. During peacetime, squadrons provide air logistics support for all Navy commands as well as provide continuous quality training for mobilization readiness. Fleet Logistics Support squadrons have no counterpart in the Regular Navy. They represent 100% of the Navy's medium and heavy intra-theater airlift, and operate year-round, around the world providing the critical link between deployed seagoing units and air mobility command logistics hubs. VR-1 provides dedicated airlift support to the Office of the Secretary of the Navy, Chief of Naval Operations and Commandant of the Marine Corps. All VR squadrons are from the Navy Reserve. 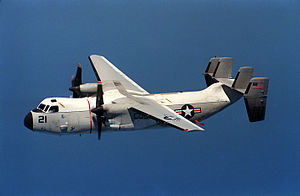 There are two Fleet Logistic Support squadrons equipped with the C-2A Greyhound Carrier Onboard Delivery (COD) aircraft - one on each coast. VRC-30 is based at Naval Air Station North Island, VRC-40 is based at Naval Station Norfolk. These squadrons send two-plane detachments with each deploying aircraft carrier. The C-2A Greyhound, more commonly referred to as a "COD" (short for Carrier onboard delivery), is used to deliver high priority parts, supplies, people, and mail to/from the carrier and shore sites near the carrier operating area. 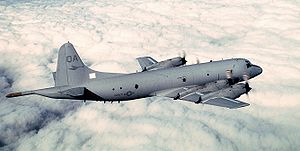 Maritime patrol aircraft are used primarily for reconnaissance, anti-surface warfare and anti-submarine warfare. Volume 2 of the Dictionary of American Naval Aviation Squadrons contains comprehensive histories over 150 patrol squadrons. Its Appendix 7 details the lineage of every VP, VPB, VP(H), and VP(AM) squadron from 1922 through the late 1990s. 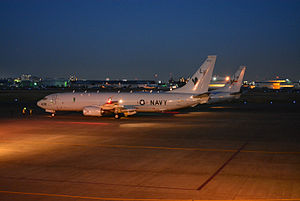 Some of these organizations are not technically "squadrons", however they have custody of and routinely fly Navy aircraft. 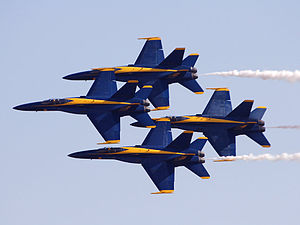 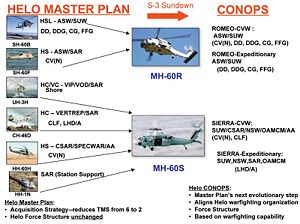 US Navy helicopters are used for antisubmarine warfare, antisurface warfare, mine warfare, combat search and rescue, special operations, and vertical replenishment missions. The USN helicopter community, in accordance with the "Helicopter Master Plan", is currently undergoing a transformation to reduce costs and infrastructure. The plan calls for expanding warfighting capabilities, modernizing the force, necking down from eight to three aircraft types, and consolidating force structure where possible. This plan is also leading to the renaming of many squadrons.[9] All Navy helicopter (or rotary wing) squadrons' informal names start with the letter "H".

The Mine Countermeasures Squadrons employ 28 total MH-53E Sea Dragon helicopters. The primary mission of the Sea Dragon is Airborne Mine Countermeasures (AMCM). The MH-53 can operate from carriers and other warships and is capable of towing a variety of mine hunting/sweeping countermeasures systems.[10] The MH-53E Sea Dragon is also a capable heavy-lift asset, with three powerful turboshaft engines and a maximum take-off weight of 69,750 pounds (31,640 kg). This gives the Sea Dragon the capability to carry an impressive amount of cargo, personnel or equipment over long distances. The Sea Dragon remains in service as the Navy's only heavy-lift helicopter and only proven mine countermeasure platform. While not intended to specifically be the MH-53E's replacement, the U.S. Navy's largest-ever helicopter, the new Sikorsky CH-53K King Stallion, intended to start flying its evaluations in 2015, has an increased MTOW figure of some 84,700 lb (38,400 kg), some 14,950 lb (6,781 kg) heavier than the Sea Dragon. 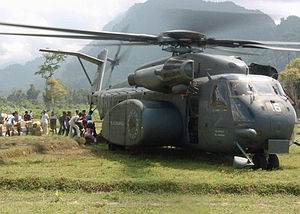 An MH-53 delivers aid in Sumatra following the 2004 Tsunami. 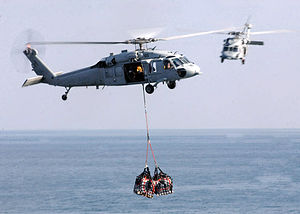 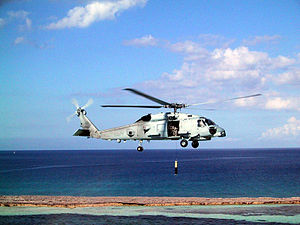 There are three types of fixed wing training squadrons - Primary, Intermediate, and Advanced - that train Student Naval Aviators to become United States Naval Aviators and Naval Flight Officers in the Navy, Marine Corps, and Coast Guard. Navy training aircraft are typically painted orange and white, the exception are the T-6As flown by TRAWING Six. The T-6As were procured along with the USAF's T-6As and are painted in the same blue and white color scheme as the USAF's T-6As. 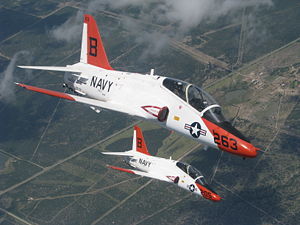 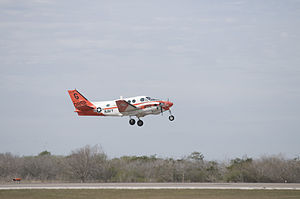 The United States Navy's Helicopter Training Squadrons provide advanced helicopter flight instruction to all Navy, US Marine Corps, and United States Coast Guard helicopter flight students as well as international students from several allied nations after completion of primary flight training in one of the VT squadrons. Students who successfully complete the program earn the right to wear the coveted "Wings of Gold."[15] and will receive orders to their selected aircraft's FRS. 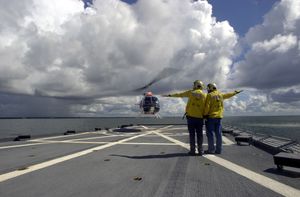 Fleet Composite squadrons' primary missions include providing fixed wing and helicopter services to the Fleet in support of the United States and Allied operational training exercises and operating the Navy's only operational Unmanned Aerial Vehicle (UAV). This aircraft is utilized primarily in reconnaissance missions. Tactical employment of this unique asset primarily supports both Battle Group deployments and Amphibious Warfare Operations.[16]

The Unmanned Reconnaissance Helicopter's purpose is to support Intelligence, Surveillance, and Reconnaissance demands for conventional forces and special forces. They will be used by detachments of HSM and HSC Expeditionary squadrons to support Littoral Combat Ship operations and will also be used by unmanned detachments on other aviation capable navy ships.[17] The aviation platforms will consist of the MQ-8B, flown by SH-60 aviators, and the MQ-8C Fire-X, flown by enlisted operators.[18] HUQ-1 was established to function as a Fleet Replacement Squadron to train the operators of these systems who will report to HSC and HSM squadrons or other units operating them. 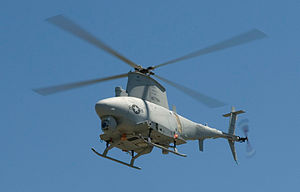 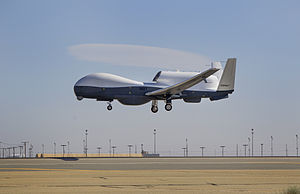 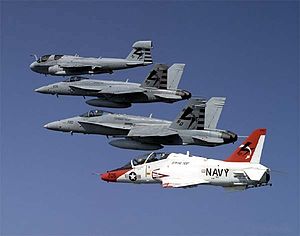