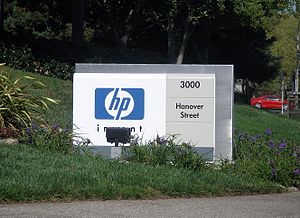 Hewlett-Packard, commonly referred to as HP, is an information technology corporation based in Palo Alto, California. The company was founded by Bill Hewlett and Dave Packard in a small garage on January 1, 1939.[1] As of 2012, HP is the largest technology company in the world in terms of revenue, ranking 10th in the Fortune Global 500.[2] As of 2012, Hewlett-Packard has made a total of 129 acquisitions since 1986.[a][3] Its first acquisition was the F.L. Moseley Company in 1958. This move enabled HP to enter the plotter business, which was the predecessor to its printer business of today.[4] In 1989, HP purchased Apollo Computer for US$476 million,[5][6] enabling HP to become the largest supplier of computer workstations.[5] In 1995, the company bought another computer manufacturer, Convex Computer, for US$150 million.[7] In 2000, HP spun off its measurement, chemical and medical businesses into an independent company named Agilent Technologies.[8][9] The company's largest acquisition came in 2002, when it merged with Compaq, a personal computer manufacturer, for US$25 billion.[10][11] The combined company overtook Dell for the largest share of the personal computer market worldwide in the second quarter.[12]

Within IT networking hardware and storage market segments, HP has made acquisitions worth over US$15 billion, the largest one being 3PAR and 3COM acquisitions made in 2010, totaling over $5 billion. The most recent acquisition in consumer networking segment is Aruba Networks in March 2015 for US$3 billion. On the IT services and consulting side, the largest acquisition made so far is Electronic Data Systems, in 2008 for US$13.9 billion

In the software products market segment, a stream of acquisitions has helped strengthen HP's position .[13] The largest software company purchased prior to 2011 was Mercury Interactive for US$4.5 billion. This acquisition doubled the size of HP's software business to more than US$2 billion in annual revenue.[14]

Between 2012 and 2013, HP had no acquisitions in any of its business segments as the firm was recouping an $8.8 billion write-off suffered as a result of acquisition of British software company Autonomy Corporation for $11 billion in 2011. After this two-year gap, in 2014, HP returned to the acquisition market by acquiring Computer Networking Software company Shunra. The majority of companies acquired by HP are based in the United States.