This is a list of cities in Pennsylvania, of which there are 57. Cities may theoretically be first-class, second-class, second-class A, or third-class (of which there are 54), according to population and adoption of certain ordinances. However, all first-class (of which there is 1), second-class (of which there is 1), and second-class A (of which there is 1) cities, as well as 24 third-class cities, have adopted Home Rule Charters, which change a city's relationship with the state so much that they are generally no longer considered to be a city under state law. However, they are still considered cities for classification purposes. Unlike other similar lists for Pennsylvania's towns and boroughs and townships, this list does include cities with Home Rule Charters, as, unlike in the previous cases, excluding them would severely limit the comprehensibility of this list. As in those previous cases, however, it should be strongly emphasized that these are not really cities under state law, and they are therefore also listed in "List of Pennsylvania Municipalities and Counties with Home Rule Charters, Optional Charters, or Optional Plans," and are indicated below.

In addition to Home Rule Charters, third-class cities were able to adopt Optional Charters from 1957 to 1972, and all cities (since 1972) have been able to adopt Optional Plans. Optional Charters and Plans function approximately the same way, the major difference being that new applications for the former are no longer accepted and that the latter has been generalized to apply to any municipality in the state. The third-class cities which adopted Optional Charters before 1972 and have not since adopted Home Rule Charters, of which there are 11, still retain them. In addition, 3 third-class cities have Optional Plans. Optional Charters and Plans function mostly to allow the city (or any other municipality, in the case of Optional Plans) to design its own form of local government, but do not significantly change the relationship between the city (or other municipality) and the state, and therefore these cities are still considered cities under state law. Finally, the City of Parker employs a unique (for Pennsylvania cities) form of local government, that of the weak mayor council form, which is established under a special law uniquely for that city; it is still considered a city under state law. Because of Home Rule Charters, Optional Charters, Optional Plans, and Parker's unique situation, only 14 of Pennsylvania's cities still use one of the two standard forms of Pennsylvania city government, the council-manager or mayor-council forms. 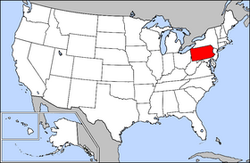 Pennsylvania's location within the United States.

Philadelphia, the largest city in Pennsylvania and the fifth most populous city in the United States.

Pittsburgh, the second-largest city in the state. 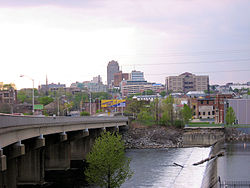 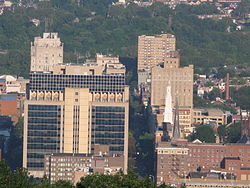