This is a list of countries by public debt to GDP ratio as listed by Eurostat for the EU and by CIA's World Factbook 2012 for the rest of the world. It is the cumulative total of all government borrowings less repayments that are denominated in a country's home currency.

Gross government debt is the most relevant data for discussions of government default and debt ceilings. It is different from external debt, which includes the foreign currency liabilities of non-government entities. Both are not mutually exclusive.

The figures here are represented as a percentage of annual gross domestic product. The public debt relative information provided by national sources (CIA) is not always objective and true, given the fact that there is no independent research in these matters. Note that net debt figures are included where gross debt figures are unavailable in the CIA set. 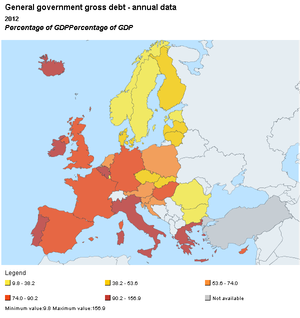 Government debt as a percent of GDP in EU in 2012