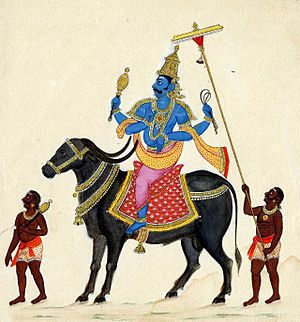 Yama, the Hindu god of death and Lord of Naraka (hell). He subsequently entered Buddhist, Chinese, Tibetan, Korean, and Japanese mythology as the king of hell.
File:God A Ah Puch (Kimi).jpg
Maya death god "A" way as a hunter, Classic period

Deities associated with death take many different forms, depending on the specific culture and religion being referenced. Psychopomps, deities of the underworld, and resurrection deities are commonly called death deities in comparative religions texts. The term colloquially refers to deities that either collect or rule over the dead, rather than those deities who determine the time of death. However, all these types will be included in this article.

Many have incorporated a god of death into their mythology or religion. As death, along with birth, is among the major parts of human life, these deities may often be one of the most important deities of a religion. In some religions with a single powerful deity as the source of worship, the death deity is an antagonistic deity against which the primary deity struggles. The related term death worship has most often been used as a derogatory term to accuse certain groups of morally abhorrent practices which set no value on human life.

In polytheistic religions or mythologies which have a complex system of deities governing various natural phenomena and aspects of human life, it is common to have a deity who is assigned the function of presiding over death. The inclusion of such a "departmental" deity of death in a religion's pantheon is not necessarily the same thing as the glorification of death which is commonly condemned by the use of the term "death-worship" in modern political rhetoric.

In the theology of monotheistic religion, the one god governs both life and death. However, in practice this manifests in different rituals and traditions and varies according to a number of factors including geography, politics, traditions and the influence of other religions.

Emperor(s) of Youdu (Capital City of the Underworld)

Kings of the Ten Underworld Palaces

The rest only have surnames including Li, Yu, Lu, Bi, Lu and Xue

Four Kings of the Underworld

Ghost Kings of the Five Regions

Ghost Kings of the Five Regions(Ver.2)

Four Generals of the Direct Alter of Fengdu

Eight Generals of the Inner Alter of Fengdu

Eight Generals of the Outer Alter of Fengdu

Ten Masters of the Underworld

(Note: In some versions, Xie Bian and Fanjiu are the He Wuchang and Bai Wuchang)

Wardens of the Nine Prison of Fengdu

Administers of the Six Paths of Rebirth of Fengdu 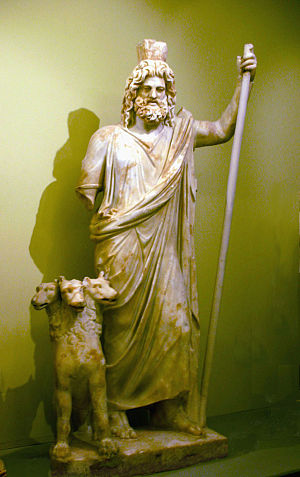 Hades with his dog Cerberus 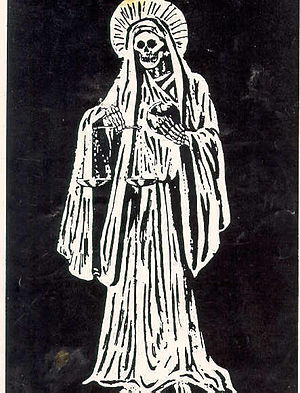 Death is the protagonist in the science fantasy novel On a Pale Horse, book one in a series of 8 books, the "Incarnations of Immortality".

In the novel The Book Thief Death is the narrator of the story.[citation needed]

Death is the name of one of the "The Endless" in the DC Universe.[citation needed]

Death is a recurring character in the Discworld series written by Terry Pratchett. Books featuring Death include Mort, Reaper Man, Soul Music, Hogfather and Thief of Time. He also makes a cameo appearance in Interesting Times.

In A Song of Ice and Fire by George R.R. Martin the guild of assassins known as the Faceless Men believe that all death deities are simply different incarnations of the same god, known to them as the Many-Faced God or Him of Many Faces, while the Faith of the Seven worships The Stranger as one of Seven Aspects of God representing Death and the Unknown.

In the works of J. R. R. Tolkien, especially The Silmarillion, Nàmo AKA Lord Mandos is the Doomsman of the Valar, Judge of the Dead and Lord of the Halls of Mandos (where Elves await reincarnation and humans recreat before making the Journey into the Beyond), similar to Hades.

In the CW TV show Supernatural, Death makes a crucial appearance. He is portrayed as existing alongside God since the beginning of time, and being so ancient he cannot remember when he came into existence, he may even be older than God. In the show he is one, the oldest and most powerful, of the Four Horsemen- Death, Famine, War and Pestilence. He is not portrayed as a villain.

In the manga and anime of the popular hit series Sailor Moon, the tenth and last Sailor Soldier of the Moon Kingdom, Sailor Saturn, is the Sailor Soldier of all silence, destruction, oblivion, nothingness, ruin, and death. Her weapon is the Silent Glaive that is capable of utterly obliterating and destroying entire worlds and planets if used to its maximum potential.

In the Marvel Comics Universe, the personification of death is Mistress Death.

The Transformers mythos feature the character of Mortilus, a Cybertronian deity who represents death and who later betrayed his brethren and was destroyed, leading to the longevity of the Transformer race. A similar character is The Fallen, a member of the Thirteen Primes who is identified as the guardian of Entropy.