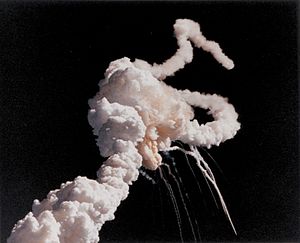 Space Shuttle Challenger disintegrates 73 seconds after its 1986 launch, due to hot gases escaping through a compromised seal in an SRB leading to structural failure of the external tank. The accident resulted in the death of all seven crew members.

This article lists verifiable spaceflight-related accidents and incidents resulting in fatality or near-fatality during flight or training for manned space missions, and testing, assembly, preparation or flight of manned and unmanned spacecraft. Not included are accidents or incidents associated with intercontinental ballistic missile (ICBM) tests, unmanned space flights not resulting in fatality or serious injury, or Soviet or German rocket-powered aircraft projects of World War II. Also not included are alleged unreported Soviet space accidents, which are considered fringe theories by a majority of historians.

(In the statistics below, "astronaut" is applied to all space travellers to avoid the use of "astronaut/cosmonaut".)

The history of space exploration has had a number of incidents that resulted in the deaths of the astronauts during a space mission. As of 2014[update], in-flight accidents have killed 18 astronauts, in four separate incidents.[2]

NASA astronauts who have lost their lives in the line of duty are memorialized at the Space Mirror Memorial at the Kennedy Space Center Visitor Complex in Merritt Island, Florida. Cosmonauts who have died in the line of duty under the Soviet Union were generally honored by burial at the Kremlin Wall Necropolis in Moscow. It is unknown whether this remains tradition for Russia, since the Kremlin Wall Necropolis was largely a Communist honor, and no cosmonauts have died during spaceflight since the Soviet Union dissolved in 1991.

There have been four fatal in-flight accidents on missions which were considered spaceflights under the internationally accepted definition of the term, plus one on the ground during rehearsal of a planned flight. In each case all crew were killed. To date, no individual member of a multi-member crew has died during a mission or rehearsal.

There has also been an accident on a flight that was considered a spaceflight by those involved but not under the internationally accepted definition:

Fatalities during spaceflight training or testing

In addition to accidents during spaceflights, 13 astronauts, test pilots, and other personnel have died during training and test flights.

Apart from actual disasters, a number of missions resulted in some very near misses and also some training accidents that nearly resulted in deaths.