List of unmanned spaceflights to the International Space Station 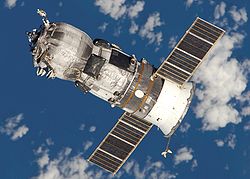 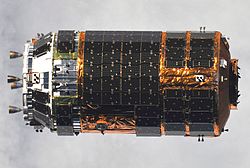 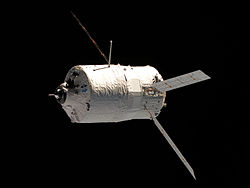 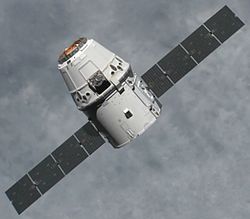 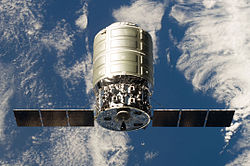 Unmanned spaceflights to the International Space Station (ISS) are made primarily to deliver cargo, however several Russian modules have also docked to the outpost following unmanned launches. Resupply missions typically use the Russian Progress spacecraft, European Automated Transfer Vehicles, Japanese Kounotori vehicles, and the American Dragon and Cygnus spacecraft. The primary docking system for Progress spacecraft is the automated Kurs system, with the manual TORU system as a backup. ATVs also use Kurs, however they are not equipped with TORU. Progress and ATV can remain docked for up to six months.[1][2] The other spacecraft - the Japanese HTV, the SpaceX Dragon and the Orbital Sciences Cygnus - rendezvous with the station, before being grappled using Canadarm2, and berthed at the nadir port of the Harmony module for one to two months. As of December 2015, Progress spacecraft have flown most of the unmanned missions to the ISS.

Baikonur Cosmodrome in Kazakhstan is the oldest and busiest spaceport. The first module of the ISS was launched from Baikonur Cosmodrome Site 81 as the robot spacecraft Zarya in 1998 and flew unmanned for about two years before the first crew arrived. The Progress spacecraft is the most frequent cargo ship sent from Baikonur to the station, bringing supplies such as food, fuel, gas, experiments and parts. Its light payload is offset by its ability to deliver critical replacement parts at short notice. Fresh fruit and vegetables from earth are an important part of the crew's diet. 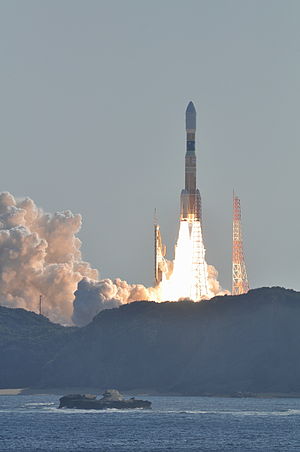 Located in Japan on an island 115 kilometres (71 mi) south of Kyūshū, the Tanegashima Space Center (TCS) is the launch site for H-II Transfer Vehicle (HTV), called Kounotori (こうのとり?, Oriental Stork or White Stork), used to resupply the Kibō Japanese Experiment Module (JEM) and the (ISS). The name Kounotori was chosen for the HTV by JAXA because "a white stork carries an image of conveying an important thing (a baby, happiness, and other joyful things), therefore, it precisely expresses the HTV's mission to transport essential materials to the ISS".[3]

The European Space Agency (ESA) uses the Guiana Space Centre or, more commonly, Centre Spatial Guyanais (CSG). It is a French spaceport near Kourou in French Guiana. Operational since 1968, it is particularly suitable as a location for a spaceport due to its proximity to the equator, and that launches are in a favorable direction over water. The near-equatorial launch location provides an advantage for launches to low-inclination (or geostationary) Earth orbits compared to launches from spaceports at higher latitude, the eastward boost provided by the Earth's rotation is about 463 metres per second (1,520 ft/s) (1,035 miles per hour) at this spaceport.

Cape Canaveral Air Force Station, located in Florida, USA, has been operational since 1950; with its first orbital launch occurring in 1958. All of NASA's manned Mercury and Gemini missions were launched from the Cape, along with some of the earlier Apollo missions. Cape Canaveral is adjacent to the Kennedy Space Center, where the majority of Apollo missions and all the Space Shuttle missions were launched from. Under contract with NASA, SpaceX launches the Dragon spacecraft to resupply the American portion of the ISS. The Dragon can transport 6,000 kilograms (13,000 lb) of pressurized and unpressurized cargo and can return 3,000 kilograms (6,600 lb) to Earth. It is the only unmanned resupply vehicle capable of returning a payload.

The Mid-Atlantic Regional Spaceport, located at Wallops Island, Virginia, USA, is the launch site for the Orbital Sciences Cygnus spacecraft for resupplying the American portion of the ISS.

This is a list of unmanned spaceflights to the International Space Station. Assembly flights are indicated in bold text.

^ For vehicles that are berthed to the station using the Space Station Remote Manipulator System (SSRMS) the times of berthing and unberthing are given. These vehicles remain physically attached to the station longer than indicated when counting the time between initial SSRMS capture and release. Currently, the Japanese HTV, the SpaceX Dragon and the Orbital Sciences Cygnus are the visiting vehicles to attach in this manner. For all other vehicles the times of docking and undocking are given.