Lithuanian mythology is a type of Baltic mythology, developed by Lithuanians throughout the centuries. 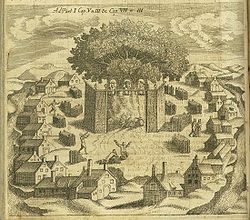 Surviving information about Baltic paganism in general is incomplete. As with most ancient Indo-European cultures (e.g. Greece and India), the original primary mode of transmission of seminal information such as myths, stories, and customs was oral, the then-unnecessary custom of writing being introduced later during the period of the text-based culture of Christianity. Most of the early written accounts are very brief and made by foreigners, usually Christians, who disapproved of pagan traditions. Some academics regard some texts as inaccurate misunderstandings or even fabrications. In addition many sources list many different names and different spellings, thus sometimes it is not clear if they are referring to the same thing.

Lithuania became Christianized between the end of the 14th century and the beginning of the 15th century, but pagan religion survived for another two centuries, gradually losing its cultural influence and coherence. The Evangelical religion, established in Prussia by Albert of Brandenburg-Prussia, promised to preach to people in their own language, rather than Latin. Duke Albert established the Albertina University in Königsberg, where languages of the neighboring countries were taught and the first books in those languages were printed. The last conceptions of the old religion survived approximately until the beginning of the 19th century. However, as it was the tradition, they were never documented by followers of the religion themselves, and all known facts are from documents left by outsiders. 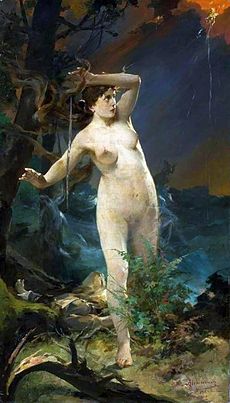 Although the pre-Abrahamic religion in Lithuania died out much later than in any other European country, actual information on Lithuanian mythology is scattered and late. Interest in it has increased since the beginning of the 19th century, when the narrative material began to be collected. However, at this time the majority of Lithuanians had already ceased to live according to the beliefs and doctrines of their earlier religion, and story-tellers could not explain their meaning more adequately and precisely. Without these explanations, the folk tales and songs collected by scholars seemed to some mythologists and historians to be more the raw material out of which a mythology or a heroic epos might be composed than the mythology itself. The relics of the old religion were interwoven with other stories of folkloric mythology, and were subsequently documented quite well, including many testimonies written by storytellers themselves. However, the more syncretic character of this mythology raised some uncertainties and, subsequently, hypotheses and discussions, as to what the pagan Lithuanian religion actually was.

Because of this view, many scholars preferred to write their own reconstructions of Lithuanian mythology, based also on historical, archaeological, and ethnographic data. The first such reconstruction was written by the Polish-speaking Lithuanian historian Theodor Narbutt at the beginning of the 19th century. Two well-known attempts at reconstruction have been attempted more recently by Marija Gimbutas and Algirdas Julien Greimas. This method of reconstruction is thorny, and none of the attempts has been satisfactory.

The two biggest difficulties in this process are, first, the fact that Lithuanian mythology was not static, but constantly developed, so that it did not remain in the same form over the longer periods usually treated by mythologists. Secondly, Slavic mythology, which in general concepts seems very different from its Lithuanian and Latvian counterparts, had a certain influence on people's thought, which affected the ethnographic data, and thus the judgments of scholars who made use of such data.

Thus, the first reconstructions and descriptions of Lithuanian mythology offer a far from true description of their subject, being little more than a patchwork of arbitrarily selected details from Lithuanian and Belarusian mythologies. The account offered by Narbutt, and ideas raised by Adam Mickiewicz (for example, in his play Dziady) are among these, but mythologists since the second half of the 19th century have become more accurate, as a result of their knowledge of contemporary linguistic research which shows the structural differences between Lithuanian and Slavic languages.

The most modern academics exploring Lithuanian mythology in the second half of the 20th century were Norbertas Vėlius and Gintaras Beresnevičius. Their works are considered as the most objective. They are very critical and careful about mythological sources.

Relations with other mythological systems

Lithuanian mythology is perhaps closest to Latvian mythology, and according to the prevalent point of view, Lithuanians shared the same myths and basic features of their religion with the Old Prussians. On the other hand, individual elements have much in common with other mythological systems, and especially with those of neighbouring cultures.

The periods of Lithuanian mythology

Pre-Abrahamic mythology is known mainly through speculation and reconstruction, although the existence of some mythological elements, known from later sources, has been confirmed by archaeological findings. It is reflected in folk tales, such as Jūratė and Kastytis and Eglė the Queen of Serpents.

The next period of Lithuanian mythology started in the 15th century, and lasted till approximately the middle of the 17th century. The myths of this period are mostly heroic, concerning the founding of the state of Lithuania. Perhaps two the best known stories are those of the dream of the Grand Duke Gediminas and the founding of Vilnius,[1] the capital of Lithuania, and of Šventaragis, which also concerns the history of Vilnius. Many stories of this kind reflect actual historical events. In general, these myths are coloured by patriotism. Already by the 16th century, there existed a non-unified pantheon; data from different sources did not correspond one with another, and local spirits, especially those of the economic field, became mixed up with more general gods and ascended to the level of gods.[2]

The third period began with the growing influence of Christianity and the activity of the Jesuits, roughly since the end of the 16th century. The earlier confrontational approach to the pre-Christian Lithuanian heritage among common people was abandoned, and attempts were made to use popular beliefs in missionary activities. This also led to the inclusion of Christian elements in mythic stories.

The last period of Lithuanian mythology began in the 19th century, when the importance of the old cultural heritage was admitted, not only by the upper classes, but by the nation more widely. The mythical stories of this period are mostly reflections of the earlier myths, considered not as being true, but as the encoded experiences of the past. They concentrated on moral problems, and on a heroic vision of the past, rather than on individual heroes, who very often even lacked proper names, being referred to as "a duke", "the ruler of the castle", etc. 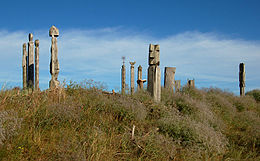 Stories, songs, and legends of this kind describe laws of nature and such natural processes as the change of seasons of the year, their connections with each other and with the existence of human beings. Nature is often described in terms of the human family; in one central example (found in many songs and stories), the sun is called the mother, the moon the father, and stars the sisters of human beings. Lithuanian mythology is rich in gods and minor gods of water, sky and earth.

Lithuanian myths often reveal the inner heroism of a human being, symbolising this inner being in terms of various feats in the mystic lands on the opposite side of the Earth, or in the sky of the South polar regions, commonly describing these places as "The Land over All the Seas" and "The Cosmic Underwater Kingdom", respectively.

Myths that talk about problems of morality are the simplest, and are close to popular fables common to all European nations. The main idea in these stories is that a Goddess or God often visits people to guide them in moral questions, but people are not able to recognize her / him. According to these stories, a human should listen to his or her inner voice of harmony and justice, in order to act morally in the presence of a God / Goddess, for people do not know when and under what circumstances they are under his gaze. Some scholars stress the mixed Christian and pre-Christian character of these stories.