Litomyšl (Czech pronunciation: [ˈlɪtomɪʃl̩]; German: Leitomischl) is a town and municipality in the Pardubice Region of the Czech Republic. The chateau complex in the town centre is listed as a UNESCO World Heritage Site. Litomyšl is located 136 kilometres (85 mi) east of Prague.

The eastern Bohemian town of Litomyšl emerged in the 13th century on the site of an older fortified settlement on the Trstenice path - an important trading route linking Bohemia and Moravia. The German population was expelled as a result of the Benes Decrees in 1945

Until 1918, LEITOMISCHL - LITOMYŠL (older German name Leutomischl) was part of the Austrian monarchy (Austria side after the compromise of 1867), head of the district with the same name, one of the 94 Bezirkshauptmannschaften or "okresní hejtmanství" in Bohemia.[1] 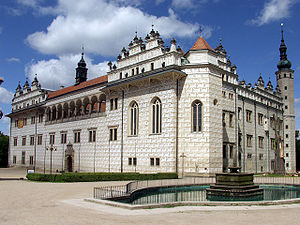 The dominant feature of Litomyšl is the monumental Renaissance castle dating from the years 1568–1581. The buildings of the castle precincts are not only exceptional for their architectural refinement, but have also inscribed themselves in history as the birthplace of the Czech composer, Bedřich Smetana. On the elongated square, which is one of the largest in the Czech Republic, stands a town hall of Gothic origin and a series of Renaissance and baroque houses, many with arcades and vaulted groundfloor rooms. One of the most important of these is the House At the Knights (U Rytířů) with its remarkable façade. In the past the town was also a significant religious centre; it was in Litomyšl in 1344 that the second bishopric to be established in Bohemia was founded, although it ceased to exist during the Hussite Wars. In the 19th century, the Litomyšl Grammar School was of great importance.

The cultural traditions of the town go much beyond regional and national frontiers. The exquisite interiors of the castle, especially the baroque castle theatre, the amphitheatre in the castle park and Smetana House, all offer varied programmes of concerts and theatrical performances and thus enrich the life of the town throughout the year. In 1994 the meeting of the seven Central European presidents took place at the castle. The chateau complex was included on the UNESCO World Heritage List in 1999.

Litomyšl is also home to the "Portmoneum", a museum of the artist and writer Josef Váchal in the home of his admirer Josef Portman, who commissioned Váchal's murals and painted furniture in the house.

Magdalena Dobromila Rettigová, the author of the first cookbook written in Czech, lived here between 1834 and her death in 1845.

There is an extensive permanent exhibition of Olbram Zoubek's (a famous Czech contemporary sculptor and designer) sculptures and art in Litomyšl Castle Vault Gallery.

See also: List of twin towns and sister cities in the Czech Republic

Litomyšl is twinned with: