From Infogalactic: the planetary knowledge core
Jump to: navigation, search
For other uses, see Lizard (disambiguation).

Lizards are a widespread group of squamate reptiles, with approximately over 6,000 species,[1] ranging across all continents except Antarctica, as well as most oceanic island chains. The group, traditionally recognized as the suborder Lacertilia, is defined as all extant members of the Lepidosauria (reptiles with overlapping scales) that are neither sphenodonts (i.e., tuatara) nor snakes – they form an evolutionary grade.[2] While the snakes are recognized as falling phylogenetically within the Toxicofera clade from which they evolved, the sphenodonts are the sister group to the squamates, the larger monophyletic group, which includes both the lizards and the snakes.

Lizards typically have feet and external ears, while snakes lack both of these characteristics. However, because they are defined negatively as excluding snakes, lizards have no unique distinguishing characteristic as a group.[citation needed] Lizards and snakes share a movable quadrate bone, distinguishing them from the sphenodonts, which have more primitive and solid diapsid skulls. Many lizards can detach their tails to escape from predators, an act called autotomy. Vision, including color vision, is particularly well developed in most lizards, and most communicate with body language or bright colors on their bodies, as well as with pheromones. Lizards are the most speciose among extant reptiles, comprising about 60% of all living species.

The adult length of species within the suborder ranges from a few centimeters for chameleons such as Brookesia micra and geckos such as Sphaerodactylus ariasae to nearly 3 m (9.8 ft) in the case of the largest living varanid lizard, the Komodo dragon. Some extinct varanids reached great size. The extinct aquatic mosasaurs reached 17 m (56 ft), and the giant monitor Megalania is estimated to have reached up to 7 m (23 ft) long.

The name Sauria was coined by James Macartney (1802);[3] it was the Latinisation of the French name Sauriens, coined by Alexandre Brongniart (1800) for an order of reptiles in the classification proposed by the author, containing lizards and crocodilians,[4] later discovered not to be each other's closest relatives. Later authors used the term "Sauria" in a more restricted sense, i.e. as a synonym of Lacertilia, a suborder of Squamata that includes all lizards but excludes snakes. This classification is rarely used today because Sauria so-defined is a paraphyletic group. It was defined as a clade by Jacques Gauthier, Arnold G. Kluge and Timothy Rowe (1988) as the group containing the most recent common ancestor of archosaurs and lepidosaurs (the groups containing crocodiles and lizards, as per Mcartney's original definition) and all its descendants.[5] A different definition was formulated by Michael deBraga and Olivier Rieppel (1997) who defined Sauria as the clade containing the most recent common ancestor of Choristodera, Archosauromorpha and Lepidosauromorpha and all their descendants.[6] However, neither of these uses have gained wide acceptance among researchers specializing in lizards. 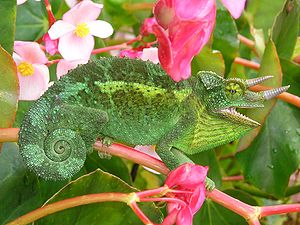 Feral Jackson's chameleon from a population introduced to Hawaii in the 1970s.

Sight is very important for most lizards, both for locating prey and for communication, and, as such, many lizards have highly acute color vision. Most lizards rely heavily on body language, using specific postures, gestures, and movements to define territory, resolve disputes, and entice mates. Some species of lizards also use bright colors, such as the iridescent patches on the belly of Sceloporus. These colors would be highly visible to predators, so are often hidden on the underside or between scales and only revealed when necessary.

The particular innovation in this respect is the dewlap, a brightly colored patch of skin on the throat, usually hidden between scales. When a display is needed, a lizard can erect the hyoid bone of its throat, resulting in a large vertical flap of brightly colored skin beneath the head which can be then used for communication. Anoles are particularly famous for this display, with each species having specific colors, including patterns only visible under ultraviolet (UV) light, as many lizards can see UV light.[7]

Lizard tails are often a different and dramatically more vivid color than the rest of the body so as to encourage potential predators to strike for the tail first.

Many lizard species (including geckos, skinks, and others) are capable of shedding part of their tails through a process called autotomy. This is an example of the pars pro toto principle, sacrificing "a part for the whole", and is employed by lizards to allow them to escape when captured by the tail by a predator. The detached tail writhes and wiggles, creating a deceptive sense of continued struggle, distracting the predator's attention from the fleeing prey animal.

The lizard will partially regenerate its tail over a period of weeks. A 2014 research identified 326 genes involving the regeneration of lizard tails.[8] The new section will contain cartilage rather than bone, and the skin may be distinctly discolored compared to the rest of the body.

Most lizards are oviparous (egg laying) though in some species the eggs are retained until the live young emerge. Parthenogenesis in squamata (that is, asexual reproduction) occurs in about 50 species of lizard.[9][10] and it is believed that female ability to do this in the absence of males is widespread among lizards.

Sexual selection in lizards shows evidence of female mate choice of males is found in their favouring males who display fitness indicators such as fewer ectoparasites.[11]

The retention of the basic 'reptilian' amniote body form by lizards makes it tempting to assume any similar animal, alive or extinct, is also a lizard. However, this is not the case, and lizards as squamates are part of a well-defined group.

The earliest amniotes were superficially lizard-like, but had solid, box-like skulls, with openings only for eyes and nostrils, termed the anapsid condition. Turtles retain, or have re-evolved, this skull form. Early anapsids later gave rise to two new groups with additional holes in their skulls to make room for and anchor larger jaw muscles. The synapsids, with a single fenestra, gave rise to the large, but generally lizard-like pelycosaurs, which include Dimetrodon, a group which again gave rise to the therapsids, including the cynodonts, from which the modern mammals would evolve.

The modern Sphenodon retains the basic lepidosaur skull, distinguishing it from true lizards in spite of superficial similarities. Squamates, including snakes and all true lizards, further lightened the skull by eliminating the lower margin of the lower skull opening.

The earliest known fossil remains of a lizard belong to the iguanian species Tikiguania estesi, found in the Tiki Formation of India, which dates to the Carnian stage of the Triassic period, about 220 million years ago.[12] However, doubt has been raised over the age of Tikiguania because it is almost indistinguishable from modern agamid lizards. The Tikiguania remains may instead be late Tertiary or Quaternary in age, having been washed into much older Triassic sediments.[13] Lizards are most closely related to a group called Rhynchocephalia, which includes the tuatara. Rhynchocephalians first appeared in the Late Triassic, so it can be inferred that the lizard-rhynchocephalian divergence occurred at this time and that the earliest lizards appeared in the Triassic.[13]

Mitochondrial phylogenetics suggest that the first lizards evolved in the late Permian. Most evolutionary relationships within the squamates are not yet completely worked out, with the relationship of snakes to other groups being the most problematic. On the basis of morphological data, iguanid lizards were thought to have diverged from other squamates very early on, but recent molecular phylogenies, both from mitochondrial and nuclear DNA, do not support this.[14] Because snakes have a faster molecular clock than other squamates,[14] and few early snake and snake ancestor fossils have been found,[15] resolving the relationship between snakes and other squamate groups is difficult.

Lacertilia comprises four generally recognized infraorders, Iguania, Gekkota, Amphisbaenia and Autarchoglossa, with the "blind skinks" in the family Dibamidae having an uncertain position. While traditionally excluded from the lizards, the snakes are usually classified as a clade with a similar subordinal rank.[16] 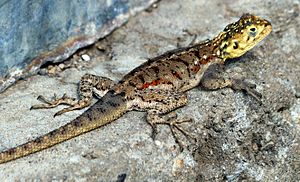 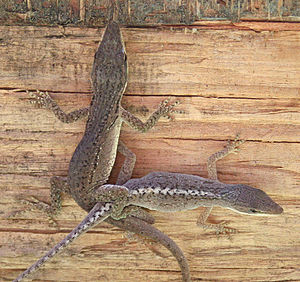 The suborder Iguania, found in Africa, southern Asia, Australia, the New World and the islands of the west Pacific, forms the sister group to the remainder of the squamata. The various species are largely arboreal, and have primitively fleshy, non-prehensile tongues, some even have scales, but this condition is obviously highly modified in the chameleons. This clade includes the following families:

Active hunters, the Gekkota include three families comprising the distinctive cosmopolitan geckos and the legless, flap-footed lizards of Australia and New Guinea. Like snakes, the flap-footed lizards and most geckos lack eyelids. Unlike snakes, they use their tongues to clean their often highly developed eyes. While gecko feet have unique surfaces that allow them to cling to glass and run on ceilings,[17] the flap-foot has lost its limbs. The three families of this suborder are: 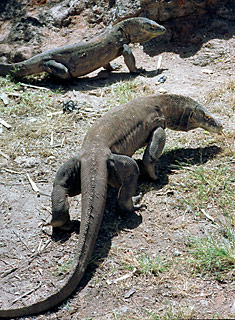 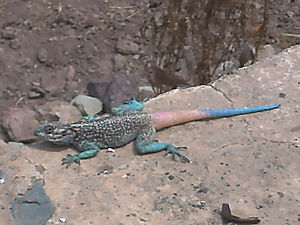 Lizard of Yemen with blue and pink colours. 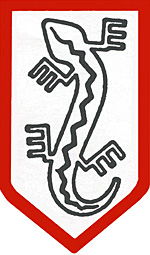 A lizard as the symbol of the Military Organization Lizard Union, a World War II Polish anti-Nazi resistance group. 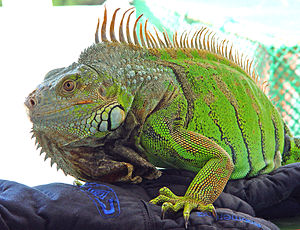 Most lizard species are harmless to humans. Only the largest lizard species, the Komodo dragon, which reaches 3.3 m (11 ft) in length and weighs up to 166 kg (365 lb), has been known to stalk, attack, and, on occasion, kill humans. An eight-year-old Indonesian boy died from blood loss after an attack in 2007.[18] The venoms of the Gila monster and beaded lizard are not usually deadly, but they can inflict extremely painful bites due to powerful jaws.

Numerous species of lizard are kept as pets, including bearded dragons, iguanas, anoles, and geckos (such as the popular leopard gecko). Some lizards have an affinity for humans, but many are suspicious or skittish around them. Lizards that bite humans are very rare. Lizards are predominantly insectivorous, but some eat fruit, or vegetables. Live crickets and worms are the most typical foods for pet lizards, though the crested gecko (not a friendly lizard to humans) can feed entirely on fruit.

Lizard symbolism plays important, though rarely predominant, roles in some cultures (e.g., Tarrotarro in Australian Aboriginal mythology). The Moche people of ancient Peru worshipped animals and often depicted lizards in their art.[19] According to a popular legend in Maharashtra, a common Indian monitor, with ropes attached, was used to scale the walls of the Sinhagad fort in the Battle of Sinhagad.[20]

Green iguanas are eaten in Central America, where they are referred to sometimes as "chicken of the tree" after their habit of resting in trees and their supposed chicken-like taste,[21] and spiny-tailed lizards are eaten in Africa. In North Africa, Uromastyx species are considered dhaab or 'fish of the desert' and eaten by nomadic tribes.[22]

Close-up of the head of the legless fossorial amphisbaenid Rhineura. 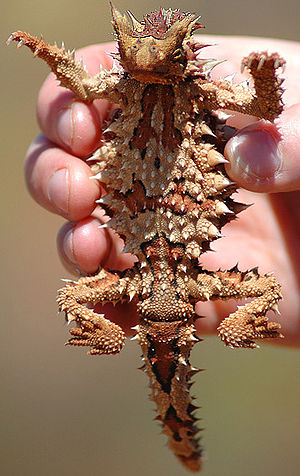 Underside of a thorny devil, an agamid, Western Australia. 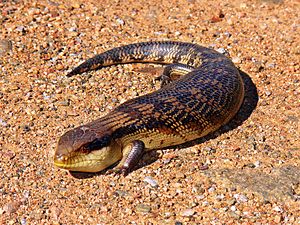 The eastern blue-tongued lizard, a scincomorph. 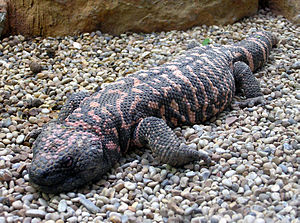 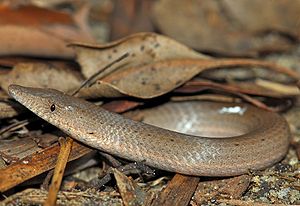