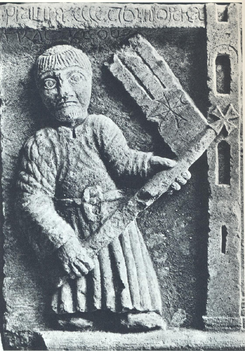 Lombard standard bearer re-entering Milan in 1167 (the year of the League's foundation) after its destruction in 1162 by Emperor Frederick I. Bas-relief Porta Romana, Milan (1171)

The Lombard League (Italian: Lega Lombarda) was a medieval alliance formed in 1167[1] to counter the attempts by the Holy Roman Emperors from the House of Hohenstaufen to assert Imperial influence over Italy. At its apex it included most of the cities of Northern Italy, although its membership changed with time, and was supported by the Pope. With the death of the third and last Hohenstaufen emperor Frederick II in 1250 it became obsolete and was disbanded.

The association succeeded the Veronese League, established in 1164 by Verona, Padua, Vicenza, and the Republic of Venice, after Emperor Frederick I Barbarossa had claimed direct Imperial control over Italy at the 1158 Diet of Roncaglia and began to replace the Podestà magistrates by his own commissioners. It was backed by Pope Alexander III (the town of Alessandria was named in his honour), who also wished to see Frederick's power in Italy decline.[2] Formed at Pontida on 1 December 1167, the Lombard League included—beside Verona, Padua, Vicenza and Venice—cities like Crema, Cremona, Mantua, Piacenza, Bergamo, Brescia, Milan, Genoa, Bologna, Modena, Reggio Emilia, Treviso, Vercelli, Lodi, Parma, Ferrara and even some lords, such as the Marquis Malaspina and Ezzelino da Romano.

Though not a declared separatist movement, the League openly challenged the emperor's claim to power (Honor Imperii). Frederick I strived against the cities, especially Milan, which already had been occupied and devastated in 1162. He nevertheless was no longer able to play off the cities against each other. At the Battle of Legnano on 29 May 1176, the emperor's army finally was defeated. The Peace of Venice, which took place in 1177, established a six-year truce from August, 1178 to 1183, when in the Peace of Constance a compromise was found where after the Italian cities agreed to remain loyal to the Holy Roman Empire but retained local jurisdiction and droit de régale over their territories. Among the League's members, Milan, now favoured by the emperor, began to take a special position, which sparked conflicts mainly with the Cremona citizens.

The Lombard League was renewed several times and upon the death of Frederick's son Emperor Henry VI in 1197 once again gained prestige, while Henry's minor son Frederick II, elected King of the Romans, had to fight for the Imperial throne against his Welf rival Otto IV. In 1226 Frederick, sole king since 1218 and emperor since 1220, aimed to convene the Princes in Italy in order to prepare the Sixth Crusade.

The efforts of Emperor Frederick II to gain greater power in Italy were aborted by the cities, which earned the League an Imperial ban. The emperor's measures included the taking of Vicenza and his victory in the 1237 Battle of Cortenuova which established the reputation of the Emperor as a skillful strategist.[2] Nevertheless, he misjudged his strength, rejecting all Milanese peace overtures and insisting on unconditional surrender. It was a moment of grave historic importance, when Frederick's hatred coloured his judgment and blocked all possibilities of a peaceful settlement. Milan and five other cities withstood his attacks, and in October 1238 he had to unsuccessfully raise the siege of Brescia.

The Lombard League once again receiving papal support by Pope Gregory IX, who excommunicated Frederick II in 1239,[3] and effectively countered the emperor's efforts. During the 1248 Siege of Parma, the Imperial camp was assaulted and taken, and in the ensuing battle the Imperial side was routed. Frederick II lost the Imperial treasure and with it any hope of maintaining the impetus of his struggle against the rebellious communes and against the pope. The League was dissolved in 1250 once Frederick II died. Under his later successors the Empire exerted much less influence on Italian politics.