London Irish RFC is an English rugby union club originally based in Sunbury, Surrey, where the senior squad train, the youth teams and senior academy play home games, and the club maintain their administrative offices. The club competes in the top division of English rugby union, the Aviva Premiership. The club also compete in the Anglo-Welsh Cup as well as one of the two Europe-wide club competitions—the European Champions Cup or European Challenge Cup, depending on their performance in the previous season. The club will continue to play their home games at the Madejski Stadium in Reading, Berkshire until 2026.

The team plays in green and white colours, with a reversed away strip. London Irish won its first major trophy in 2002, claiming the Powergen Cup (the competition that later became the Anglo-Welsh Cup). Irish also reached the final of the 2009 Guinness Premiership, narrowly losing 10–9 to Leicester Tigers at Twickenham Stadium.[2] In the 2007/08 season the team came close to a place in the Heineken Cup Final losing out to Stade Toulousain 15–21 in a tense semi-final encounter at Twickenham Stadium.[3] The club's mascot is an Irish Wolfhound called Digger. 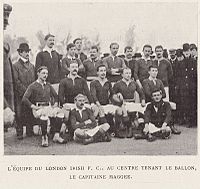 The squad that played Racing Métro 92 at Parc des Princes in 1899. 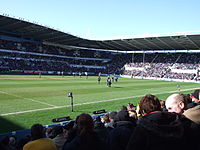 London Irish playing at the Madejski Stadium with 22,648 people in attendance. 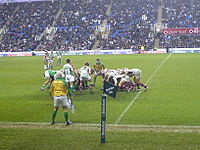 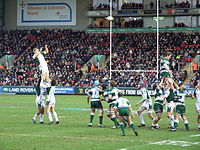 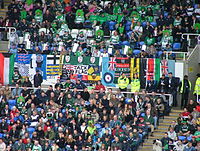 London Irish drummers and fans at the Madejski Stadium.

London Irish was the last club to be formed in England by working and student exiles from the home countries, following London Scottish in 1878 and London Welsh in 1895. The first game took place on 1st October 1898 against the former Hammersmith club at Herne Hill Athletic Ground, London Irish winning by eight points to three. The team benefited from the early recruitment of vet and Irish international Louis Magee.[4]

London Irish manage their own academy, with players such as Nick Kennedy, Jonathan Joseph, Topsy Ojo and Delon Armitage having gone on to play for the senior side and be internationally capped.

London Irish play at the Madejski Stadium, in Reading. Madejski is the home of Reading FC and was opened in August 1998. The ground is a 24,161 all-seater capacity stadium, and was the largest used as a regular home ground in the premiership before Wasps moved to the Ricoh Arena in 2014.

With the exception of the annual London Double Header at Twickenham, all London Irish home matches are played at the Madejski. The largest crowd for a London Irish match was for a game against London Wasps on 15 March 2008 during the 2007–08 Guinness Premiership. The crowd of 23,790 was also the highest attendance for a regular season Guinness Premiership match[5] until December 2008.

On 12 March, 2016 London Irish will play their first home match away from Madejski (and Twickenham) when they face Saracens at the New York Red Bulls' Red Bull Arena in the New York Metropolitan Area, USA.

For player movements leading up to the 2016–17 season, see List of 2016–17 Aviva Premiership transfers#London Irish.

2015-16 Note: Flags indicate national union as has been defined under WR eligibility rules. Players may hold more than one non-WR nationality.

Note: Flags indicate national union as has been defined under WR eligibility rules. Players may hold more than one non-WR nationality.

For more details on this topic, see London Irish Amateur.

London Irish also host London Irish Amateur RFC (a separate legal entity) for non-professionals to allow them to improve in Rugby. The team play at the location of London Irish's training ground and offices, Hazelwood in Sunbury. Some players such as Justin Bishop and Kieran Campbell have come through the ranks to play for London Irish.[8] 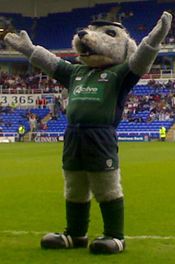 Digger is an Irish Wolfhound and official mascot of London Irish. He has an extremely important job of providing support to the Club.

On 30 May 2003 Digger won the "Best Mascot" award in the Zurich Premiership at the Premier Rugby Marketing Awards held at Twickenham.[9]

On 23 April 2006, Digger ran the London Marathon raising money for Spinal Research. Digger finished the marathon in a time of 6 hours 39 minutes 31 seconds.[10]

Digger was joined by his cousin, Duggie, from the 2006/07 season. Much taller and much slower, Duggie has proved popular with younger children attending matchdays although Digger remains the Top Dog. As well as the two mascots, there is also a real Wolfhound, Mr Doyle, who also attends the home games. Before Mr Doyle there was also another Wolfhound, Jumbo, before Jumbo retired.