From Infogalactic: the planetary knowledge core
Jump to: navigation, search
This article is about the spinal disorder. For the sexual posture, see Lordosis behavior.

The term lordosis refers to the normal inward lordotic curvature of the lumbar and cervical regions of the spine.[1] Excessive curvature of the lower back is known as lumbar hyperlordosis, commonly called sway back, hollow back or saddle back (after a similar condition that affects some horses). A major feature of lumbar hyperlordosis is a forward pelvic tilt, resulting in the pelvis resting on top of the thighs. Curvature in the opposite convex direction, in the thoracic and sacral regions is termed kyphotic. When this curvature is excessive it is called kyphosis or hyperkyphosis.

Normal lordotic curvatures, also known as secondary curvatures, results in a difference in the thickness between the front and back parts of the intervertebral disc. Lordosis may also increase at puberty sometimes not becoming evident until the early or mid-20s. Imbalances in muscle strength and length are also a cause, such as weak hamstrings, or tight hip flexors (psoas).[citation needed]

Other health conditions and disorders can cause lordosis. Achondroplasia (a disorder where bones grow abnormally which can result in short stature as in dwarfism), Spondylolisthesis (a condition in which vertebrae slip forward) and osteoporosis (the most common bone disease in which bone density is lost resulting in bone weakness and increased likelihood of fracture) are some of the most common causes of lordosis. Other causes include obesity, kyphosis (spine curvature disorder in which the thoracic curvature is abnormally rounded), discitits (an inflammation of the intervertebral disc space caused by infection) and benign juvenile lordosis.[2]

Excessive lordotic curvature – lumbar hyperlordosis, is also called hollow back, saddle back, and swayback,[by whom?] although swayback can also refer to a nearly opposite postural misalignment that can initially look quite similar.[3][4] Common causes of lumbar hyperlordosis include tight low back muscles, excessive visceral fat, and pregnancy. Rickets, a vitamin D deficiency in children, can cause lumbar lordosis.

Although lordosis gives an impression of a stronger back, incongruently it can lead to moderate to severe lower back pain.

A visible sign of lordosis is an abnormally large arch of the lower back and the person appears to be puffing out his or her stomach and buttocks. Precise diagnosis of lordosis is done by looking at a complete medical history, physical examination and other tests of the patient. X-rays are used to measure the lumbar curvature, bone scans are conducted in order to rule out possible fractures and infections, magnetic resonance imaging (MRI) is used to eliminate the possibility of spinal cord or nerve abnormalities, and computed tomography scans (CT scans) are used to get a more detailed image of the bones, muscles and organs of the lumbar region.[7]

Only the muscles on the front and on the back of the thighs can rotate the pelvis forward or backward while in a standing position because they can discharge the force on the ground through the legs and feet. Abdominal muscles and erector spinae can't discharge force on an anchor point while standing, unless one is holding his hands somewhere, hence their function will be to flex or extend the torso, not the hip[citation needed]. Back hyper-extensions on a Roman chair or inflatable ball will strengthen all the posterior chain and will treat lordosis. So too will stiff legged deadlifts and supine hip lifts and any other similar movement strengthening the posterior chain without involving the hip flexors in the front of the thighs. Abdominal exercises could be avoided altogether if they stimulate too much the psoas and the other hip flexors.

Controversy regarding the degree to which manipulative therapy can help a patient still exists. If therapeutic measures reduce symptoms, but not the measurable degree of lordotic curvature, this could be viewed as a successful outcome of treatment, though based solely on subjective data. The presence of measurable abnormality does not automatically equate with a level of reported symptoms.[8]

While not really a 'treatment', the art of tai chi chuan calls for adjusting the lower back curvature (as well as the rest of the spinal curvatures) through specific re-alignments of the pelvis to the thighs, it's referred to in shorthand as 'dropping the tailbone'. The specifics of the structural change are school specific, and are part of the jibengung (body change methods) of these schools. The adjustment is referred to in tai chi chuan literature as 'when the lowest vertebrae are plumb erect...' [9] 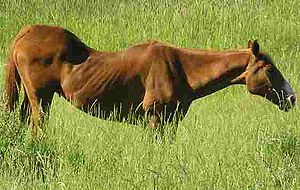 A horse with significant lordosis
See also: Back (horse)

Lordosis can be also seen in animals, in particular horses and other equines. Usually called "swayback," soft back, or low back, it is an undesirable conformation trait. Swayback is caused in part from a loss of muscle tone in both the back and abdominal muscles, plus a weakening and stretching of the ligaments. As in humans, it may be influenced by bearing young; it is sometimes seen in a broodmare that has had multiple foals. However, it is also common in older horses whose age leads to loss of muscle tone and stretched ligaments. It also occurs due to overuse or injury to the muscles and ligaments from excess work or loads, or from premature work placed upon an immature animal. Equines with too long a back are more prone to the condition than those with a short back, but as a longer back is also linked to smoother gaits, the trait is sometimes encouraged by selective breeding. It has been found to have a hereditary basis in the American Saddlebred breed, transmitted via a recessive mode of inheritance. Research into the genetics underlying the condition has several values beyond just the Saddlebred breed as it may "serve as a model for investigating congenital skeletal deformities in horses and other species."[10]

Lordosis in a sexual context is the naturally occurring position for sexual receptivity in non-primate mammalian females. The lordosis position is facilitated by the appropriate sensory input, such as touch or smell. For example, in female hamsters, when they are in the correct hormonal state there are areas on the flank, that when touched by the male, facilitate lordosis. [11]

Several brain areas are known to be important for the regulation of lordosis, including the ventromedial nucleus of the hypothalamus (VMN). The activity of the VMN in the regulation of lordosis is estrogen-dependent and when it is lesioned lordosis is abolished. Displays of lordosis can be affected by exposure to stress during puberty.[12] [13] Specifically, stress can suppressed the hypothalamic-pituitary-gonadal (HPG) axis and therefore decrease concentrations of gonadal hormones. Consequently, these reductions in exposure to gonadal hormones around puberty can result in decreases in sexual behavior in adulthood, including displays of lordosis.[14]

Lordosis behavior refers to the position that some mammalian females (including cats, mice, and rats) display when they are ready to mate ("in heat"). The term is also used to describe mounting behavior in male mammals.

In radiology, a lordotic view is an X-ray taken of a patient leaning backwards.[15]

Lordosis in the human spine makes it easier for humans to bring the bulk of their mass over the pelvis. This allows for a much more efficient walking gait than that of other primates, whose inflexible spines cause them to resort to an inefficient forward leaning "bent-knee, bent-waist" gait. As such, lordosis in the human spine is considered one of the primary physiological adaptations of the human skeleton that allows for human gait to be as energetically efficient as it is.[16]