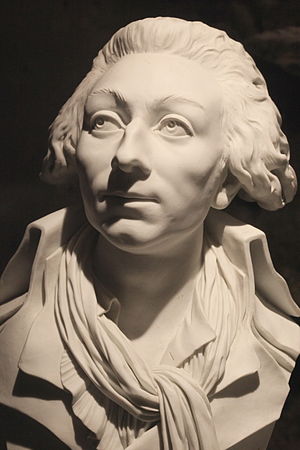 Born in Paris, he belonged to a well-known family, his great-grandfather, Michel Robert Le Peletier des Forts, count of Saint-Fargeau, having been Controller-General of Finances.[1] After the death of his title-holding family, Le Peletier gained a vast amount of wealth.

He entered into politics by becoming a lawyer ("avocat") in the employ of the Place du Châtelet, a prison. In 1785 Le Peletier was advanced to avocat-general. In 1789 he was elected to the Parlement of Paris, and in that same year he became a deputy of the noblesse to the States-General.

Initially, he shared the conservative views of the majority of his class, but by degrees his ideas changed and became increasingly radical. On 13 July 1789 he demanded the recall of Necker, whose dismissal by the king had aroused great excitement in Paris. In the Constituent Assembly he moved the abolition of the death penalty, of the galleys and of branding, and the substitution of beheading for hanging. This attitude won him great popularity, and on 21 June 1790 he was made president of the Constituent Assembly.[1] He remained in this position until 5 July 1790.

During the existence of the Legislative Assembly, he was elected President of the General Council for the Yonne département in 1791. He was then elected by this département to become a deputy to the Convention. Here he was in favor of the trial of Louis XVI by the Assembly and was a deciding vote for the death of the king.[1]

While in the Convention Le Peletier focused mainly on revolutionary reform of education, promoting a Spartan education. It called for both males and females to be taught in state-run schools and taught revolutionary ideas instead of the customary history, science, mathematics, language and religion. His educational plan was supported by Robespierre and his ideas were borrowed in later schemes, notably by Jules Ferry. 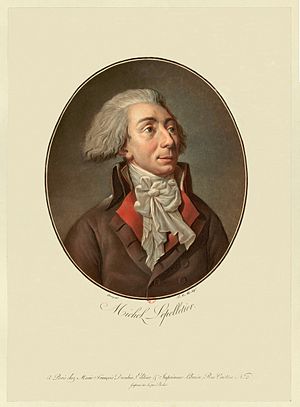 On 20 January 1793, the eve of the king's execution, Le Peletier was assassinated in a restaurant in the Palais Royal. His murderer, Philippe Nicolas Marie de Pâris, a member of the Garde du Corps, allegedly plunged a saber that he had hidden under his cloak into Le Peletier's chest. His assassin fled to Normandy, where, on the point of being discovered, he supposedly shot himself in the head. Other sources claim the real murderer fled to England where he died years later.

Le Peletier's daughter Suzanne, 11 years old at his death, became a national celebrity. She was officially adopted by the French Nation and given the title "Daughter of the State."[2]

The Convention honored Louis Michel Le Peletier with a magnificent funeral.[1] His body was displayed in the Place Vendôme beneath the statue of King Louis XIV. Le Peletier was buried in the Panthéon in Paris in 1793. His body was removed by his family on 14 February 1795.

Just a month after the assassination, on 23 February 1793, the Opéra-Comique presented the first of four performances of a musical treatment of his life and death called Le Peletier de Saint-Fargeau, ou Le premier martyr de la République française, with a libretto by Auguste-Louis Bertin d'Antilly and music by Frédéric Blasius.[3][4]

The station Saint-Fargeau of the Paris Métro is named for him.

A Sèvres biscuit porcelain bust of Louis Michel Le Peletier is on display in the Château de Vizille, Isère.

On 30 September 1793 the French Navy's ship Séduisant, one of two newly commissioned ships, with 74 guns, over 56 meters in length and 1550 tons in weight, was renamed Peletier. On 30 May 1795, the ship reverted to her original name Séduisant. 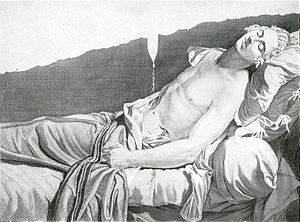 The painter Jacques-Louis David represented his death in a famous painting, Les Derniers moments de Michel Lepeletier or Lepelletier de Saint-Fargeau sur son lit de mort. David described his painting of Le Peletier's face as "Serene, that is because when one dies for one's country, one has nothing with which to reproach oneself." This painting, known only through a drawing made by a pupil of David, is considered by scholars the first official painting of the French Revolution, a rehearsal for David's later achievement The Death of Marat.

Le Peletier had a brother, Felix (1769–1837), well known for his advanced ideas,[1] and a brother Amédée Louis Michel Lepeletier de Saint Fargeau (1770–1845), a noted entomologist. The writer and academician Jean d'Ormesson is descended from his daughter Suzanne Louise.

Le Peletier appears as an antagonist in Assassin's Creed Unity, where he is depicted as a secret member of the Templar Order under Grand Master Francois-Thomas Germain who believes that he is doing what is right for France before what is right for the Templars. He is assassinated by the protagonist Arno Dorian in the Palais-Royale after he votes to have the king executed.