From Infogalactic: the planetary knowledge core
Jump to: navigation, search
Not to be confused with Upper Merion Township, Pennsylvania.

Lower Merion Township is a township in Montgomery County, Pennsylvania and part of the Pennsylvania Main Line. As of the 2010 U.S. Census, the township had a total population of 57,825. Lower Merion has the 5th highest per-capita income[citation needed] and the 12th highest median household income[citation needed] in the country with a population of 50,000 or more.

The name Merion originates with the county of Merioneth in north Wales. Merioneth is an English-language translation of the Welsh Meirionnydd.

Lower Merion, along with Upper Darby, Haverford, Cheltenham together form as the major inner ring suburbs of Philadelphia.

Lower Merion Township was first settled in 1682 by Welsh Quakers who were granted a tract of land (the Welsh Tract) by William Penn. In 1713, Lower Merion was established as an independent Township with about 52 landholders and tenants. In 1900, the Township was incorporated as a Township of the First Class. Lower Merion is home to the oldest continuously used place of worship in the United States, the Merion Friends Meeting House, used continuously since 1695.

The Mill Creek Historic District, and Seville Theatre are listed on the National Register of Historic Places.[1] Green Hill Farms was added in 2011.

Forming the Township's southern border is City (Line) Avenue (U.S. Route 1) separating it from the City of Philadelphia. Along City Ave, starting with the Schuylkill Expressway and continuing on to Lord & Taylor at Belmont Avenue in Bala Cynwyd, is what is known as the "Golden Mile"[citation needed] which also includes the radio and television studios of WCAU, the Exxon Building, the Fox Building and the Germantown Savings Bank Building. In back of these buildings are the One-Ninety-One Condominiums and the Bala Cynwyd Plazas.

The Township's eastern border is along the Schuylkill River which is paralleled by the Schuylkill Expressway (I-76), a limited access roadway that connects to Philadelphia and the Valley Forge Interchange of the Pennsylvania Turnpike. The famed Mid-County Interchange is located just outside the Township.

Other highways serving the Township are U.S. Route 30 and Pennsylvania Routes 23 and 320.

Lower Merion is a first-class township with 14 commissioners elected by ward.[6]

Lower Merion Township is the heart of the affluent Pennsylvania Main Line series of suburban communities, named after the "Main Line" railroad that runs through the township. Now known as the SEPTA Paoli/Thorndale Line, the rail line has station stops in Lower Merion in the following communities within the township:

The SEPTA Cynwyd Line, with weekday service, has stops at:

According to Lower Merion Township's 2013 Comprehensive Annual Financial Report,[7] the top employers in the city are: 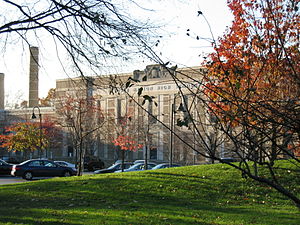 There are six elementary schools, two middle schools, and two high schools (Lower Merion and Harriton High Schools). Students are split between schools depending on location of residence.

Actor David Boreanaz attended Rosemont School of the Holy Child in the Rosemont section of Lower Merion Township. His father, Dave Roberts, is a weatherman for WPVI-TV's Action News in Philadelphia, Pennsylvania.

Rosemont School of the Holy Child, located in Rosemont and in Lower Merion Township, is affiliated with but not governed by the Roman Catholic Archdiocese of Philadelphia. The school is adjacent to Rosemont College.

Other private schools in the area include: the Shipley School, the Baldwin School, Waldron Mercy Academy, the Haverford School, the Agnes Irwin School, Friends Central School, French International School of Philadelphia, and other schools outside the area. 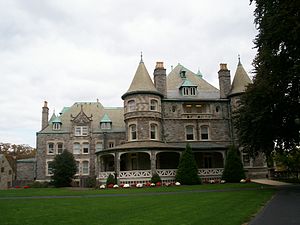 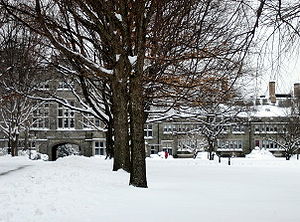 In 2010, the township received national media attention when a student filed a lawsuit after a school administrator used the webcam of a school issued laptop to spy on the student while the student was in his home. See Robbins v. Lower Merion School District for more information.

In the case of Harriton High, the Electronic Frontier Foundation (EFF) and the American Civil Liberties Union (ACLU) believe that it constitutes an infringement, and filed an amicus brief in support of the victim. 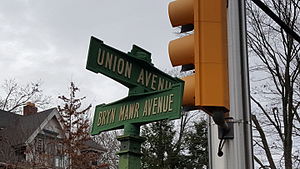 In 2012, the Federal Highway Administration modified the Manual on Uniform Traffic Control Devices which would have required the replacement of Lower Merion's historic street signs, some of which dating back to the early 1910's. After some campaigning by local residents and by Senator Pat Toomey, the Lower Merion Board of Commissioners declared, via an ordinance, the entire Lower Merion as a historic district and received a waiver from Secretary of Transportation Ray LaHood. [10][11][12]