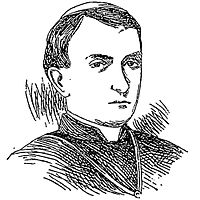 Lucien Louis Joseph Napoleon Cardinal Bonaparte, 4th Prince of Canino and Musignano (15 November 1828 – 19 November 1895), was a French cardinal. He was born in Rome, the son of Charles Lucien Bonaparte and his wife Zénaïde Bonaparte.

Cardinal Bonaparte was ordained to the priesthood on 13 December 1856 by Pope Pius IX, giving up his Italian title. He served at numerous posts both in France and in Italy. He was created Cardinal of Santa Pudenziana in 1868. In 1879, he was given the additional title of Cardinal Priest of S. Lorenzo in Lucina. Cardinal Bonaparte participated in the First Vatican Council. He also was one of the voting cardinals that elected Gioacchino Vincenzo Raffaele Luigi Cardinal Pecci, as Pope Leo XIII. He died in 1895 and was buried in Rome.