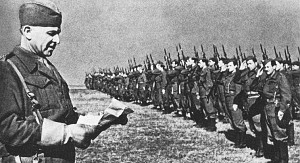 Svoboda and I Czechoslovak Army Corps

Svoboda was born in Hroznatín, Moravia. In 1915, Svoboda joined the Austro-Hungarian army and was captured later that year on the Eastern Front. Following his release, he fought for the Czechoslovak Legions in Russia. He took part in the legendary battles of Zborov and Bakhmach and returned home through the famous "Siberian anabasis". He then worked at his father's estate before launching his military career in the Czechoslovak army in 1921.

In the early 1930s Svoboda taught at a military academy. After the German occupation in the spring 1939 he became a member of a secret underground organization Obrana národa ("Defence of the nation"). It is supposed that at the same time he established connection with the Soviet intelligence. In June 1939 he fled to Poland, forming an initial Czechoslovak military unit in Kraków, before falling into Soviet captivity during the Soviet invasion of Poland, however escaping a certain death after – as he related it after the war – asking his captors to call a phone number in Moscow where they could obtain a personal information about him; this worked. After the outbreak of the German offensive against the USSR Svoboda became head of the Czechoslovak military units on Eastern front. The unit fought the Germans for the first time in March 1943 near Battle of Sokolovo in Ukraine. As a commander he also led troops of the 1st Czechoslovak Army Corps in the Battle of the Dukla Pass in the fall of 1944 when, after a very heavy fighting, this unit managed to cross the Czechoslovak state border for the first time. Svoboda's charismatic leadership and personal bravery was highly valued by his commanding officer at the time, Soviet marshal Ivan Konev. Trusted by Klement Gottwald´s exile leadership and Soviet functionaries, he quickly climbed the military ranks becoming army general in August 1945.

In World War II a substantial part of Czechoslovakia was liberated by the Red Army and the 1st Czechoslovak Army Corps under the leadership of Svoboda. Svoboda was appointed Minister of Defense while being welcomed as a hero of the Eastern Front. The Soviet Union enjoyed a great popularity among the population and in the elections of 1946 the Communist Party of Czechoslovakia won 38% of the vote nationwide.

On 22 February 1948, nearly all of the non-Communist cabinet ministers resigned in protest of the practices of Gottwald and the other Communists. Svoboda was one of the few who remained in office. The Communist-dominated Trade Union Congress voted unanimously to replace the 12 departed ministers with Communists. As armed workers and the People's Militias took to the streets, Svoboda refused to quell the insurrection with military force, saying "the army will not march against the people". Two days later (and one day after a general strike in which 2.5 million citizens participated), President Edvard Beneš gave in to growing pressure from Gottwald and appointed a government dominated by Communists and pro-Soviet Social Democrats. The takeover was completely bloodless. Svoboda, whose label had been that of an "apolitical" minister since the first days of his term, then joined the Communist Party whose de facto Trojan horse he had been all the time and was elected a deputy to the National Assembly.

Svoboda was forced out of the army (in which he had reached the rank of Army General November 1945) in 1950 under pressure from the Soviets.[citation needed] He was named deputy Prime Minister from 1950 to 1951. In the purges which followed Svoboda was imprisoned and "recommended" to save his image by committing suicide, but eventually released and stripped of all offices. His return to public life took place upon a personal wish of Khrushchev, whom Svoboda had met during the war, and he subsequently headed the Klement Gottwald Military Academy. 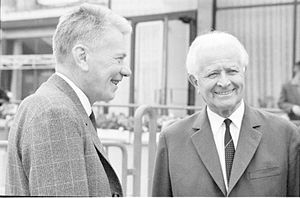 After the ending of the Antonín Novotný regime, in the period known as the Prague Spring, Svoboda was elected President of Czechoslovakia on 30 March 1968, on the recommendation of Alexander Dubček, the First Secretary. He was an acceptable candidate both for Czechs and Slovaks plus, as a war hero and a victim of the purges of the early 1950s, he enjoyed a very high esteem among the population.

Svoboda then gave a mild consent to the reform process of the new Party leadership until the Warsaw Pact intervention in August 1968. Horrified at his experiences in two world wars, he signed an order preventing the Czechoslovak Army from getting involved with the invading Warsaw Pact troops. He traveled to Moscow in order to secure the release of Dubček and the other reform leaders, who had been kidnapped by the invading forces. However, when Svoboda arrived, Leonid Brezhnev demanded that he appoint a "peasant-workers' government" in order to give credence to the planned official line—that hardliners in the KSČ had themselves requested the invasion. Svoboda not only refused, but threatened to put a bullet into his head in the presence of Brezhnev unless Dubček and the other reformists were released.

Nevertheless, Svoboda could do nothing to prevent Brezhnev from forcing the Czechoslovak representatives to sign the notorious Moscow protocols,[5] which meant a factual capitulation as they were kept secret and provided the Warsaw Pact armies with a factual licence to a "temporary stay" (as it was called later at an October parliamentary session) in Czechoslovakia. The protocols also obliged the Party leadership to promote political, cultural and other changes to stop the reform process. Svoboda also supported Minister of Defence Martin Dzúr, who ordered the Czechoslovak army to not show any resistance. Given the public outrage and resistance, Svoboda's arbitrary action was in fact in accord with Brezhnev's intent.

Svoboda survived the removal of reformist Communists in Czechoslovakia in the aftermath of the Prague Spring, while passively witnessing the purges and the suffocation of the civil liberties that had briefly been restored. He even helped muzzle the press and also contributed to Dubček's replacement with Gustáv Husák in April 1969. To the day he died, he believed and maintained that his submissive conduct before Brezhnev helped save thousands of lives from "immense consequences"; and he defended this policy by invoking his own memories of the horrors of war.

Svoboda resisted Husák's attempts to oust him from the presidency until 1975, when he was forced to retire through a constitutional act (paragraph 64 Nr.143/1968 Sb.). This act stated that if the incumbent president was unable to carry out his office's duties for a year or more, the Federal Assembly had the right to elect a permanent successor. In Svoboda's case, he had been in ill health for some time, making the act relevant.

Despite being misused by politicians for their goals several times, Svoboda still enjoys a limited credit among Czechs and Slovaks, probably due to his brave stance and fortitude on several occasions during crucial moments of Czechoslovak history. Squares and streets in both the Czech Republic and Slovakia continue to bear his name, while those of most other Communist-era leaders were removed after the Velvet Revolution. His attitude can be perhaps explained by his own words: "All I have ever done must be measured by my intention to serve best my people and my country."