The lumbar vertebrae are, in human anatomy, the five vertebrae between the rib cage and the pelvis. They are the largest segments of the vertebral column and are characterized by the absence of the foramen transversarium within the transverse process (as it is only found in the cervical region), and by the absence of facets on the sides of the body. They are designated L1 to L5, starting at the top. The lumbar vertebrae help support the weight of the body, and permit movement. 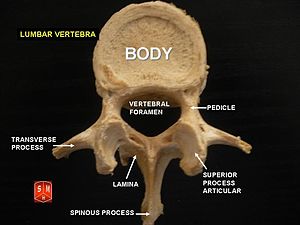 These are the general characteristics of the first through fourth lumbar vertebrae. The fifth vertebra contains certain peculiarities, which are detailed below.

The vertebral body of each lumbar vertebra is large, wider from side to side than from front to back, and a little thicker in front than in back. It is flattened or slightly concave above and below, concave behind, and deeply constricted in front and at the sides.[1]

The pedicles are very strong, directed backward from the upper part of the vertebral body; consequently, the inferior vertebral notches are of considerable depth.[1] The pedicles change in morphology from the upper lumbar to the lower lumbar. They increase in sagittal width from 9 mm to up to 18 mm at L5. They increase in angulation in the axial plane from 10 degrees to 20 degrees by L5. The pedicle is sometimes used as a portal of entrance into the vertebral body for fixation with pedicle screws or for placement of bone cement as with kyphoplasty or vertebroplasty.

The laminae are broad, short, and strong.[1] They form the posterior portion of the vertebral arch. In the upper lumbar region the lamina are taller than wide but in the lower lumbar vertebra the lamina are wider than tall. The lamina connect the spinous process to the pedicles.

The spinous process is thick, broad, and somewhat quadrilateral; it projects backward and ends in a rough, uneven border, thickest below where it is occasionally notched.[1]

The transverse processes are long and slender. They are horizontal in the upper three lumbar vertebrae and incline a little upward in the lower two. In the upper three vertebrae they arise from the junctions of the pedicles and laminae, but in the lower two they are set farther forward and spring from the pedicles and posterior parts of the vertebral bodies. They are situated in front of the articular processes instead of behind them as in the thoracic vertebrae, and are homologous with the ribs.[1]

Three portions or tubercles can be noticed in a transverse process of a lower lumbar vertebrae: the lateral or costiform process, the mammillary process, and the accessory process.[2] The costiform is lateral, the mammillary is superior (cranial), and the accessory is inferior (caudal). The mammillary is connected in the lumbar region with the back part of the superior articular process.[clarification needed] The accessory process is situated at the back part of the base of the transverse process. The tallest and thickest costiform process is usually that of L5.[2] 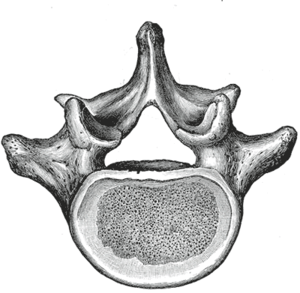 The fifth lumbar vertebra from above

The first lumbar vertebra is level with the anterior end of the ninth rib. This level is also called the important transpyloric plane, since the pylorus of the stomach is at this level. Other important structures are also located at this level, they include; fundus of the gall bladder, celiac trunk, superior mesenteric artery, termination of spinal cord, beginning of fillum terminalis, renal vessels, middle suprarenal arteries, and hilla of kidneys.

The fifth lumbar vertebra is characterized by its body being much deeper in front than behind, which accords with the prominence of the sacrovertebral articulation; by the smaller size of its spinous process; by the wide interval between the inferior articular processes, and by the thickness of its transverse processes, which spring from the body as well as from the pedicles.[1] The fifth lumbar vertebra is by far the most common site of spondylolysis and spondylolisthesis.[3]

Most individuals have five lumbar vertebrae, while some have four or six. Lumbar disorders that normally affect L5 will affect L4 or L6 in these latter individuals.

The range of segmental movements in a single segment is difficult to measure clinically, not only because of variations between individuals, but also because it is age and gender dependent. Furthermore, flexion and extension in the lumbal spine is the product of a combination of rotation and translation in the sagittal plane between each vertebra.[4]

Ranges of segmental movements in the lumbal spine (White and Panjabi, 1990) are (in degrees): [5] 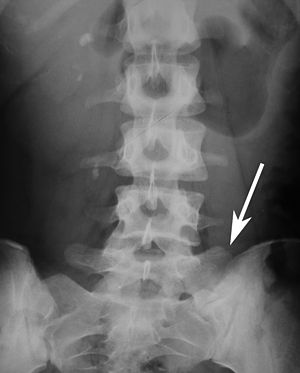 Lumbarization is an anomaly in the spine. It is defined by the nonfusion of the first and second segments of the sacrum. The lumbar spine subsequently appears to have six vertebrae or segments, not five. Conversely the sacrum appears to have only four segments instead of its designated five segments.[6]

Sacralization of the fifth lumbar vertebra (or sacralization) is a congenital anomaly, in which the transverse process of the last lumbar vertebra (L5) fuses to the sacrum on one side or both, or to ilium, or both. These anomalies are observed at about 3.5 percent of people, and it is usually bilateral. Although sacralization may be a cause of low back pain, it is asymptomatic in many cases (especially bilateral type). Low back pain in these cases most likely occurs due to chronic faulty biomechanics. In sacralization, the L5-S1 intervertebral disc may be thin and narrow. This abnormality is found by X-ray.

African apes have three and four lumbar vertebrae, (bonobos have longer spines with an additional vertebra) and humans normally five.[citation needed] This difference, and because the lumbar spines of the extinct Nacholapithecus (a Miocene hominoid with six lumbar vertebrae and no tail) are similar to those of early Australopithecus and early Homo, it is assumed that the Chimpanzee-human last common ancestor also had a long vertebral column with a long lumbar region, and that the reduction in the number of lumbar vertebrae evolved independently in each ape clade. [7] The limited number of lumbar vertebrae in chimpanzees and gorillas result in an inability to lordose (curve) their lumbar spines, in contrast to the spines of Old World monkeys and Nacholapithecus and Proconsul, which suggests that the last common ancestor was not "short-backed" as previously believed. [8]