From Infogalactic: the planetary knowledge core
Jump to: navigation, search
For the band, see Lungfish (band).

Today, lungfish live only in Africa, South America and Australia. While vicariance would suggest this represents an ancient distribution limited to the Mesozoic supercontinent Gondwana, the fossil record suggests advanced lungfish had a widespread freshwater distribution and the current distribution of modern lungfish species reflects extinction of many lineages subsequent to the breakup of Pangaea, Gondwana and Laurasia.

All lungfish demonstrate an uninterrupted cartilaginous notochord and an extensively developed palatal dentition. Basal ("primitive") lungfish groups may retain marginal teeth and an ossified braincase, but derived lungfish groups, including all modern species, show a significant reduction in the marginal bones and a cartilaginous braincase. The bones of the skull roof in primitive lungfish are covered in a mineralized tissue called cosmine, but in post-Devonian lungfishes, the skull roof lies beneath the skin and the cosmine covering is lost. All modern lungfish show significant reductions and fusions of the bones of the skull roof, and the specific bones of the skull roof show no homology to the skull roof bones of ray-finned fishes or tetrapods. During the breeding season, the South American lungfish develops a pair of feathery appendages that are actually highly modified pelvic fins. These fins are thought to improve gas exchange around the fish's eggs in its nest.[2]

Through convergent evolution, lungfishes have evolved internal nostrils similar to the tetrapods' choana,[3] and a brain with certain similarities to the lissamphibian brain (except from the Queensland lungfish, which branched off in its own direction about 277 million years ago and has a brain resembling that of the Latimeria).[4]

The dentition of lungfish is different from that of any other vertebrate group. "Odontodes" on the palate and lower jaws develop in a series of rows to form a fan-shaped occlusion surface. These odontodes then wear to form a uniform crushing surface. In several groups, including the modern lepidosireniformes, these ridges have been modified to form occluding blades.

The modern lungfishes have a number of larval features, which suggest paedomorphosis. They also demonstrate the largest genome among the vertebrates. 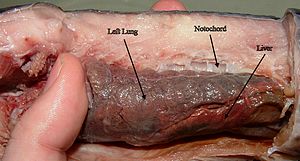 Most extant lungfish species have two lungs, with the exception of the Australian lungfish, which only has one. The lungs connect to the pharynx. The lungs of lungfish are homologous to the lungs of tetrapods. As in tetrapods and bichirs, the lungs extend from the ventral surface of the esophagus and gut.[5][6]

While other species of fish can breathe air via modified, vascularized gas bladders,[7] these bladders are usually simple sacs, devoid of complex internal structure. In contrast, the lungs of lungfish are subdivided into numerous smaller air sacs, maximizing the surface area available for gas exchange.

Of extant lungfish, only the Australian lungfish can respire through its gills. In other species, the gills are too atrophied to allow for adequate gas exchange. When a lungfish is obtaining oxygen from its gills, its circulatory system is configured similarly to the common fish. The spiral valve of the conus arteriosus is open, the bypass arterioles of the third and fourth gill arches (which do not actually have gills) are shut, the second, fifth and sixth gill arch arterioles are open, the ductus arteriosus branching off the sixth arteriole is open, and the pulmonary arteries are closed. As the water passes through the gills, the lungfish uses a buccal pump. Flow through the mouth and gills is unidirectional. Blood flow through the secondary lamellae is countercurrent to the water, maintaining a more constant concentration gradient.

When breathing air, the spiral valve of the conus arteriosus closes (minimizing the mixing of oxygenated and deoxygenated blood), the third and fourth gill arches open, the second and fifth gill arches close (minimizing the possible loss of the oxygen obtained in the lungs through the gills), the sixth arteriole's ductus arteriosus is closed, and the pulmonary arteries open. Importantly, during air breathing, the sixth gill is still used in respiration; deoxygenated blood loses some of its carbon dioxide as it passes though the gill before reaching the lung. This is because carbon dioxide is more soluble in water. Air flow through the mouth is tidal, and through the lungs it is bidirectional and observes "uniform pool" diffusion of oxygen.

Lungfish are omnivorous, feeding on fish, insects, crustaceans, worms, molluscs, amphibians and plant matter. They have an intestinal spiral valve rather than a true stomach.[8]

African and South American lungfish are capable of surviving seasonal drying out of their habitats by burrowing into mud and estivating throughout the dry season. Changes in physiology allow it to slow its metabolism to as little as 1/60th of the normal metabolic rate, and protein waste is converted from ammonia to less-toxic urea (normally, lungfish excrete nitrogenous waste as ammonia directly into the water).

Burrowing is seen in at least one group of fossil lungfish, the Gnathorhizidae. It has been proposed[by whom?] both that burrowing is plesiomorphic for lungfish, and that gnathorhizids are directly ancestral to modern Lepidosireniformes, but the similarity possibly is simply due to convergent or parallel evolution.

Lungfish can be extremely long-lived. A Queensland lungfish at the Shedd Aquarium in Chicago has been part of the permanent live collection since 1933.[9] 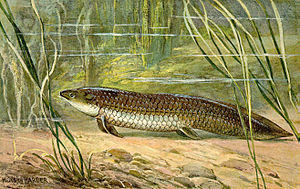 The relationship of lungfishes to the rest of the bony fish is well understood:

The relationships among lungfishes are significantly more difficult to resolve. While Devonian lungfish had enough bone in the skull to determine relationships, post-Devonian lungfish are represented entirely by skull roofs and teeth, as the rest of the skull is cartilaginous. Additionally, many of the taxa already identified may not be monophyletic.