The Lusatian culture existed in the later Bronze Age and early Iron Age (1300 BCE – 500 BCE) in most of today's Poland, parts of the Czech Republic and Slovakia, parts of eastern Germany and parts of Ukraine. It covers the Periods Montelius III (early Lusatian culture) to V of the Northern-European chronological scheme.

There were close contacts with the Nordic Bronze Age.[1] Hallstatt and La Tène influences can also be seen particularly in ornaments (fibulae, pins) and weapons.

The Lusatian culture developed as the preceding Trzciniec culture experienced influences from the middle Bronze Age Tumulus Bronze Age, essentially incorporating the local communities into the socio-political network of Iron Age Europe.[2] It forms part of the Urnfield systems found from eastern France, southern Germany and Austria to Hungary and the Nordic Bronze Age in northwestern Germany and Scandinavia. It is followed by the early Iron Age Billendorf culture in the West. In Poland, the Lusatian culture is taken to span part of the Iron Age as well (there is only a terminological difference) and is succeeded in Montelius VIIbc in northern ranges around the mouth of Vistula by the Pomeranian culture spreading south.

'Lusatian-type' burials were first described by the German pathologist and archaeologist Rudolf Virchow (1821–1902). The name refers to the Lusatia area in eastern Germany (Brandenburg and Saxony) and Poland. Virchow identified the pottery as 'pre-Germanic' but refused to speculate on the ethnic identity of their makers. 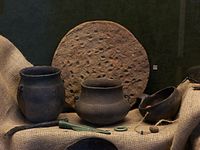 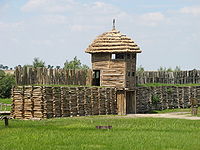 Burial was by cremation; inhumations are rare. The urn is usually accompanied by numerous—up to 40—secondary vessels. Metal grave gifts are sparse, but there are numerous hoards (e.g., Kopaniewo, Pomerania) that contain rich metalwork, both bronze and gold (hoard of Eberswalde, Brandenburg). Graves containing moulds, like at Bataune, Saxony or tuyeres attest to the production of bronze tools and weapons at the village level. The 'royal' tomb of Seddin, Brandenburg, Germany, covered by a large earthen barrow, contained Mediterranean imports like bronze-vessels and glass beads. Cemeteries can be quite large and contain thousands of graves.

Well known settlements include Biskupin in Poland, and Buch near Berlin. There are both open villages and fortified settlements (burgwall or grod) on hilltops or in swampy areas. The ramparts were constructed of wooden boxes filled with soil or stones.

The economy was mainly based on arable agriculture, as is attested by numerous storage pits. Wheat (emmer) and six-row barley formed the basic crops, together with millet, rye and oats, peas, broad beans, lentils, and gold of pleasure (Camelina sativa). Flax was grown, and remains of domesticated apples, pears, and plums have been found. Cattle and pigs were the most important domestic animals, followed by sheep, goats, horses, and dogs. Pictures on Iron Age urns from Silesia attest horse riding, but horses were used to draw chariots as well. Hunting was practiced, as bones of red and roe deer, boar, bison, elk, hare, fox, and wolf attest, but did not provide much of the meat consumed. The numerous frog bones found at Biskupin may indicate that frogs' legs were eaten as well.

Hoards in swampy areas are considered by some archaeologists (Hãnsel) as 'gifts for the Gods'. Human bones in 5 m deep sacrificial pits in Lossow (Brandenburg) might point to human sacrifice and possible ritual cannibalism.