The Luzhniki Stadium (Russian: Стадион «Лужники»; IPA: [stədʲɪˈon lʊʐnʲɪˈkʲi]), is a sports stadium in Moscow, Russia. Its total seating capacity is 78,360 seats, all covered (upgraded). The stadium is a part of the Luzhniki Olympic Complex, and is located in Khamovniki District of the Central Administrative Okrug of Moscow city. The name Luzhniki derives from the flood meadows in the bend of Moskva River where the stadium was built, translating roughly as "The Meadows".

In the past its field was mainly used (at various times) for football games played by PFC CSKA Moscow, Torpedo Moscow and Spartak Moscow, but none of these teams are based there any more. Today it is mainly used as one of the home grounds of the Russian national football team. It is one of the few major European stadia to use an artificial pitch, having installed a FIFA-approved FieldTurf pitch in 2002. The pitch is necessary because regular grass pitches cannot withstand the harsh Russian winters and must be replaced at high cost. However, a temporary natural grass pitch was installed for the 2008 UEFA Champions League Final.[1] The stadium is also used from time to time for various other sporting events and for concerts. 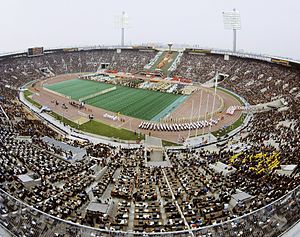 Opening ceremony of the 1980 Olympic Games 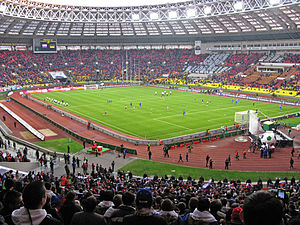 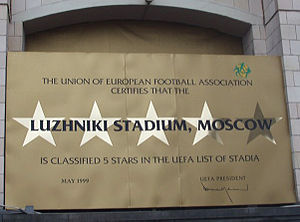 It was the chief venue for the 1980 Summer Olympics, the spectator capacity being 103,000 at that time. The events hosted in this stadium were the Opening and Closing Ceremonies, Athletics, Football finals, and the Individual Jumping Grand Prix.[3]

In 1992, the stadium was renamed the Luzhniki Stadium. An extensive renovation in 1996 saw the construction of a roof over the stands, and the refurbishment of the seating areas, resulting in a decrease in capacity.[2]

The stadium hosted the 1999 UEFA Cup Final in which Parma defeated Marseille in the second UEFA Cup final to be played as a single fixture.

The Luzhniki Stadium was chosen by UEFA to host the 2008 UEFA Champions League Final won by Manchester United who beat Chelsea in the first all-English Champions League Final on May 21. Prior to the match some skeptics questioned the state of the pitch and also the ability of Russian authorities to keep order amongst the traveling British fans; however, the match passed incident-free and a spokesman for the British Embassy in Moscow said, "The security and logistical arrangements put in place by the Russian authorities have been first-rate, as has been their cooperation with their visiting counterparts from the UK."[4]

In August 2013 the stadium hosted the World Athletics Championships.

The 2018 FIFA World Cup has been awarded to Russia and the Luzhniki Stadium has been selected by the Russia 2018 FIFA World Cup bid as the venue for the final which will be held on July 15, 2018. The stadium will then join Rome's Stadio Olimpico, Berlin's Olympiastadion, Munich's Olympiastadion and London's Wembley Stadium as the only stadia to have hosted the finals of the FIFA World Cup, UEFA's European Cup/Champions League and featured as a main stadium of the Summer Olympic Games.

The Luzhniki Stadium hosted the final game of the 1957 Ice Hockey World Championship between Sweden and the Soviet Union, attended by a crowd of 55,000 and setting a new world record at the time. Other events staged include the 1973 Summer Universiade, the 1989 Moscow Music Peace Festival and the inaugural World Youth Games in 1998. The 2013 Rugby World Cup Sevens was held at the ground. It also hosts European games for other football clubs, such as Rubin Kazan, owing to the home stadiums of the respective clubs not meeting UEFA standards.

Artists such as Michael Jackson (1993 Dangerous Tour), The Rolling Stones, Madonna (2006 Confessions Tour), Metallica (Sick Of The Studio '07 tour), Kino, U2 (2010 U2 360° Tour)[5] have all performed concerts in the stadium. It also makes an appearance in the Russian film Night Watch (Russian: Ночной дозор, Nochnoy Dozor), during the power shut-down scene when the power station goes into overload. The stadium is seen with a match taking place, and then the lights go out. New Japan Pro Wrestling, the Japanese professional wrestling promotion, ran a show in 1989 as well. Most recently, Red Hot Chili Peppers played at the stadium on July 22, 2012.[6] The Alisa album Shabash is taken from two concerts performed here over two nights in late October 1990.

On October 20, 1982, disaster struck during the UEFA Cup match between FC Spartak Moscow and HFC Haarlem. 66 people died in the stampede,[7] which made it Russia's worst sporting disaster at the time.