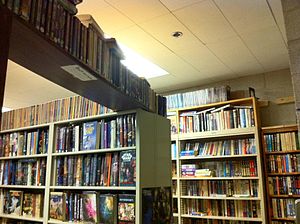 The MIT Science Fiction Society (or MITSFS) of the Massachusetts Institute of Technology is a student organization which maintains and administers a large publicly-accessible library of science fiction, fantasy, and science fantasy books and magazines.

In 1950, the club was instrumental in microfilming Astounding Science Fiction, leading to it becoming a recognized student organization in 1951. In 1961, Anthony R. Lewis became Librarian, and the library growth began in earnest. With the Stratton Student Center opening in 1965, the Society moved out of the old Walker Memorial building to the new building. At about the same time, Erwin Strauss compiled a science fiction index for periodicals from 1951 to 1955, called The MIT Science Fiction Society's Index to the S-F Magazines 1951 - 1965. MIT barred the Society from publishing the book because student organizations were prohibited from commercial activity, so Strauss published it himself under the same title.

In 1965, MITSFS joined with the UMass SFS[1] and others, including Hal Clement,[2] in forming the "Boston Science Fiction Society", holding the first Boskone convention. In 1967, NESFA arose from the ashes of that group, and brought the WorldCon to Boston in 1971. In the mid-1970s, the MIT Libraries started partially funding acquisition of newly published books.[3]

In 1972, the widow of respected Golden Age editor John W. Campbell donated her husband's personal set of Astounding Science Fiction.[4] Campbell had almost finished an MIT physics degree, but transferred to Duke University to avoid a German language requirement, and then pursued a lifetime career in writing and editing science fiction. 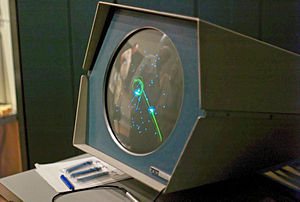 Spacewar! video game written at MIT in 1962, on an early PDP-1 minicomputer

Guest speakers at meetings of the Society have included Hugo Gernsback (whose 1963 address to the Society has been published as "Prophets of Doom"), Frederik Pohl, John W. Campbell, Isaac Asimov, Hal Clement, and Larry Niven, and more recently John Scalzi and Charles Stross. The Society was instrumental in the first Boskone science fiction convention, in NESFA founding, and in the Noreascon in 1971, among others. The World Science Fiction Society, which sponsors the Hugo awards, is still located in Cambridge.

Science fiction is an important literary genre to many members of the MIT community.[6] The first computer game Spacewar! was developed at Project MAC by Steve Russell, Martin "Shag" Graetz, Wayne Wiitanen, and other fans of the Lensman series.[6]

The Society is informal in its operations, but has developed an elaborate hierarchy with officer titles such as "Skinner", "Lord High Embezzler", and "Onseck".[7] However, actual theft and vandalism are regarded as serious crimes, and strict security rules have developed to protect the collection, such as requiring that all backpacks, permanent markers, and pens be left at the library entrance.

The over 60,000 volumes constitute the "world's largest open-shelf collection of science fiction"; although the Eaton collection of the University of California, Riverside is larger,[8] that collection is not on open shelves. According to MITSFS, the library includes "over 90% of all science fiction ever published in English". The library is freely available for browsing by the public, as well as for borrowing by members. Membership is open to anyone who pays the requisite dues.[9]

The library is financially supported by membership dues and MIT's Association of Student Activities funding board.[10] The catalog of the library may be searched through the PinkDex.[11] Some of the library's contents include full runs of Astounding Science Fiction and other American science fiction magazines, and full or nearly full runs of the major American fantasy magazines. It has first editions of The Lord of the Rings, editions in French and German of The Hobbit, all of the paperback versions of the series, CDs of the series, copies of all of Tolkien's related works, and so on. In fantasy, it has all of the Harry Potter books, with some also in German and Russian.

The collection is physically located in MIT's Julius Adams Stratton Student Center at 84 Massachusetts Avenue, Cambridge, Massachusetts. As of 22 March 2015[update], the library is usually open 7 days a week, though Monday hours may be curtailed or occasionally dropped.[12]