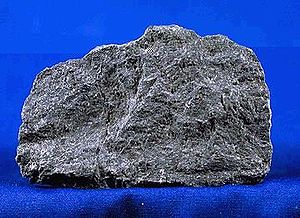 Mafic is an adjective describing a silicate mineral or rock that is rich in magnesium and iron, and hence is a portmanteau of "magnesium" and "ferric".[1] Most mafic minerals are dark in color, and common rock-forming mafic minerals include olivine, pyroxene, amphibole, and biotite. Common mafic rocks include basalt, dolerite and gabbro.

Chemically, mafic rocks are on the other side of the rock spectrum from the felsic rocks. The term roughly corresponds to the older basic rock class.

Mafic lava, before cooling, has a low viscosity, in comparison to felsic lava, due to the lower silica content in mafic magma. Water and other volatiles can more easily and gradually escape from mafic lava, so eruptions of volcanoes made of mafic lavas are less explosively violent than felsic-lava eruptions. Most mafic-lava volcanoes are shield volcanoes, like those in Hawaii.