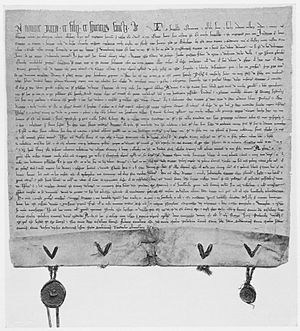 Magdeburg rights (German: Magdeburger Recht; also Magdeburg Law) were a set of town privileges first developed by Otto I, Holy Roman Emperor (936–73) and based on the Flemish law,[1] which regulated the degree of internal autonomy within cities and villages, granted by the local ruler. Named after the German city of Magdeburg, these town charters were perhaps the most important set of medieval laws in Central Europe thus far.[2] They became the basis for the German town laws developed during many centuries in the Holy Roman Empire.[2] Even more importantly, adopted and modified by numerous monarchs including the rulers of Bohemia, Hungary, and Poland, the laws were a milestone in urbanization of the entire region and prompted the development of thousands of villages and cities.[1]

As with most medieval city laws, the rights were primarily targeted at regulating trade to the benefit of the local merchants and artisans, who formed the most important part of the population of many such cities. In medieval Poland, Jews were invited along with German merchants to settle in cities as part of the royal city development policy.

Jews and Germans were sometimes competitors in those cities. Jews lived under privileges that they carefully negotiated with the king or emperor. They were not subject to city jurisdiction. These privileges guaranteed that they could maintain communal autonomy, live according to their laws, and be subjected directly to the royal jurisdiction in matters concerning Jews and Christians. One of the provisions granted to Jews was that a Jew could not be made Gewährsmann, that is, he could not be compelled to tell from whom he acquired any object which had been sold or pledged to him and which was found in his possession. Other provisions frequently mentioned were a permission to sell meat to Christians, or employ Christian servants.

External merchants coming into the city were not allowed to trade on their own, but instead forced to sell the goods they had brought into the city to local traders, if any wished to buy them.

Being a member of the Hanseatic League, Magdeburg thus was one of the most important trade cities also, maintaining commerce with the Low countries (Flanders), the Baltic states, and the interior (for example Braunschweig).

Spread of the law

Among the most advanced systems of old Germanic law of the time, in the 13th and 14th centuries, Magdeburg rights were granted to more than a hundred cities, in Central Europe apart from Germany, including Schleswig, Bohemia, Poland, Belarus,[3] especially in Pomerania, Prussia, Lithuania (following the Christianization of Lithuania), Ukraine, and probably Moldavia. In these lands they were mostly known as German or Teutonic law. Since the local tribunal of Magdeburg also became the superior court for these towns, Magdeburg, together with Lübeck, practically defined the law of northern Germany, Poland and Lithuania for centuries, being the heart of the most important "family" of city laws. This role remained until the old Germanic laws were successively replaced with Roman law under the influence of the Reichskammergericht, in the centuries after its establishment during the Imperial Reform of 1495.

Implementation of Magdeburg Rights across Europe

The Law of Magdeburg implemented in Poland was different from its original German form.[4] It was combined with a set of civil and criminal laws, and adjusted to include the urban planning popular across Western Europe – which was based (more less) on the ancient Roman model. Polish land owners used the location privilege known as "settlement with German law" across the country usually with no German settlers present. Meanwhile, the country people often ignorant of the actual German text, practiced the old common law of Poland in private relations.[4]

Notable Polish and today's Belarus towns governed on the basis of the location privilege known as the "settlement with German law" issued by Polish and Grand Duchy of Lithuania landlords included Biecz, Frysztak, Sandomierz, Kraków, Kurów, Minsk, Polotsk, Poznań, Ropczyce, Łódź, Wrocław, Szczecin, Złotoryja and since the 15th to 18th centuries by Polish–Lithuanian Commonwealth landlords included Vilnius, Trakai, Kaunas, Hrodna, Kiev, Lviv, Czernowitz (currently Chernivtsi in Ukraine), Brody, Lutsk, Volodymyr-Volynskyi, Sanok, Sniatyn, Nizhyn among many hundreds of others. The advantages were not only economic, but also political. Members of noble families were able to join the city patriciate usually unchallenged. [4] In the medieval Kingdom of Hungary, the first town to receive the Magdeburg rights was Székesfehérvár in 1237, followed by, i.a., Trnava (1238), Nitra (1248), Levoča (1271) and Žilina (1369). Towns and cities including Bardejov, Buda, Bratislava and Košice adopted the Southern German Nuremberg town rights, rather than the Magdeburg rights.