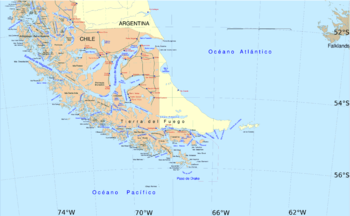 The Strait of Magellan (Spanish: Estrecho de Magallanes), also called the Straits of Magellan, is a navigable sea route separating mainland South America to the north and Tierra del Fuego to the south. The strait is the most important natural passage between the Atlantic and Pacific oceans but it is considered a difficult route to navigate because of the unpredictable winds and currents and the narrowness of the passage.

It was reported by António Galvão in 1563 that the position of the Strait of Magellan was previously mentioned in old charts as Dragon's Tail (Draco Cola): [1]

... he [Pedro] brought a map which had all the circuit of the world described. The Strait of Magellan was called the Dragon's Tail; and there were also the Cape of Good Hope and the coast of Africa. ... Francisco de Sousa Tavares told me that in the year 1528, the Infant D. Fernando showed him a map which had been found in the Cartorio of Alcobaça, which had been made more than 120 years before, the which contained all the navigation of India with the Cape of Good Hope. 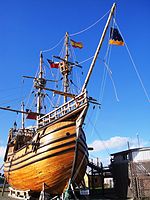 A replica of the Victoria, one of Magellan's ships, in the Museo Nao Victoria, Punta Arenas.

Ferdinand Magellan (Portuguese: Fernão de Magalhães), a Portuguese explorer and navigator in the service of Charles I of Spain, became the first European to navigate the strait in 1520 during his global circumnavigation voyage.

On March 22, 1518, the expedition was organized in Valladolid, naming Magellan captain general of the fleet and governor of all the lands discovered, and establishing the privileges of Magellan and his business associate Rui Faleiro. The fleet would become known as the "Armada de las Molucas" or "Fleet of the Moluccas". The expeditionary fleet of five ships set sail from Sanlúcar de Barrameda on September 20, 1519.[2]

Magellan's ships entered the strait on November 1, 1520, All Saints' Day, and it was initially called Estrecho de Todos los Santos (Strait of All Saints). Magellan's chronicler, Antonio Pigafetta, called it the Patagonian Strait, and others Victoria Strait, commemorating the first ship entering it.[2][3] Within seven years it was being called Estrecho de Magallanes in honor of Magellan.[2][3] The Spanish Empire and the Captaincy General of Chile used it as the southern boundary of their territory.

The first Spanish colony was established in 1584 by Pedro Sarmiento de Gamboa, who founded Nombre de Jesús and Rey Don Felipe on the northern shore of the strait. These towns suffered severe food shortages, and when the English navigator Sir Thomas Cavendish landed at the site of Rey Don Felipe in 1587, he found only ruins of the settlement. He renamed the place Port Famine.

Other early explorers included Francis Drake (1578). In February 1696 the first French expedition, under the command of M. de Gennes reached the Strait of Magellan. The expedition is described by the young French explorer, engineer and hydrographer François Froger in his A Relation of a Voyage (1699).

The strait was first carefully explored and thoroughly charted by Phillip Parker King, who commanded the British survey vessel HMS Adventure, and in consort with HMS Beagle spent five years surveying the complex coasts around the strait (1826 - 1830). This survey was presented at a meeting of the Royal Geographical Society in 1831.[citation needed]

Chile took possession of the Strait of Magellan on May 23, 1843. President Bulnes of Chile ordered this expedition after consulting the Chilean libertador Bernardo O'Higgins (1778-1842), who feared an occupation by Great Britain or France. The first Chilean settlement was Fuerte Bulnes, situated in a forested zone on the north side of the strait. Fuerte Bulnes was later abandoned, and in 1848 the city of Punta Arenas was founded farther north where the Magellanic forests meets the Patagonian plains. In Tierra del Fuego, across the strait from Punta Arenas, the village of Porvenir emerged during the Tierra del Fuego gold rush in the late 19th century.

Argentina effectively recognized Chilean sovereignty over the Strait of Magellan in the Boundary treaty of 1881 between Chile and Argentina. Argentina had previously claimed all of the strait, or at least the eastern third of it.

In 1840 the Pacific Steam Navigation Company was the first to use steamships for commercial traffic in the strait.

Until the Panama Canal opened in 1914, the Strait of Magellan was the main route for steamships traveling from the Atlantic Ocean to the Pacific. It was often considered the only safe way to move between the Atlantic and Pacific Oceans, as the Drake Passage separating Cape Horn (the southern tip of South America) from Antarctica is notorious for turbulent and unpredictable weather, and is frequented by icebergs and sea ice. Ships in the strait, protected by Tierra del Fuego to the south and the coast of continental South America to the north crossed with relative ease, and Punta Arenas became a primary refueling port providing coal for steam ships in transit. Sailing ships, however, partly because of variable winds and currents in the strait, generally preferred the Drake Passage, as they had more room to maneuver there. 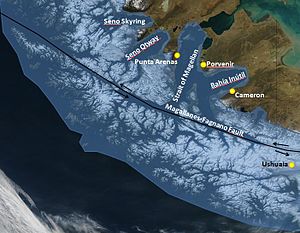 Map showing the extent of the Patagonian Ice Sheet in the Strait of Magellan area during the last glacial period. Selected modern settlements are shown with yellow dots.

The strait is approximately 570 kilometres (310 nmi; 350 mi) long and about 2 kilometres (1.1 nmi; 1.2 mi) wide at its narrowest point (Carlos III Island, west of Cape Froward).[4] The northwestern portion of the strait is connected with other sheltered waterways via the Smyth Channel. This area is similar to the Inside Passage of Alaska. South of Cape Froward, the principal shipping route follows the Magdalena Channel.

The eastern opening is a wide bay on the border of Chile and Argentina between Punta Dúngeness on the mainland and Cabo del Espíritu Santo (Cape of the Holy Spirit) on Tierra del Fuego, the border as defined in the Treaty of Peace and Friendship of 1984 between Chile and Argentina. Immediately west are Primera Angostura and Segunda Angostura, narrows formed by two terminal moraines of different ages.[5] The Primera Angostura is the closest approach of Isla Grande de Tierra del Fuego to the mainland of South America. Farther west lies Magdalena Island, part of Los Pingüinos Natural Monument. The strait's southern boundary in the east follows first the shoreline of the Isla Grande de Tierra del Fuego, then the northern end of the Canal Whiteside and the shoreline of Dawson Island.

The western part of the strait leads northwest from the northern end of the Magdalena Channel to the strait's Pacific entrance. This portion of the strait is flanked on the south by Capitán Aracena Island, Clarence Island, Santa Inés Island, Desolación Island (Cabo Pilar) and other smaller islands, and on the north by Brunswick Peninsula, Riesco Island, Muñoz Gamero Peninsula, Manuel Rodriguez Island and other minor islands of the Queen Adelaide Archipelago. Two narrow channels connect the strait with Seno Otway and Seno Skyring. A broader channel, Smyth Channel, leads north from the strait between Muñoz Gamero Peninsula and Manuel Rodriguez Island. Francisco Coloane Coastal and Marine Protected Area, a sanctuary for humpback whales, is located in this area. This part of the strait lies on the elongated Magallanes–Fagnano Fault, which marks a plate boundary between the South American Plate and the Scotia Plate. This fault continues southward under Almirantazgo Fjord and then below Fagnano Lake.[6] Possibly, new tourism industries could be established in the eastern part of the strait for watching southern right whales,[7] as the number of observations in the area has increased in recent years.[8][9]

Toponym of the zone

The place names of the zone come from a variety of origins, many from Spanish and English, and from at least one native language, that is adaptations of the Ona language to the Spanish language phonology and spelling[10] like Timaukel (hamlet at the east side of Tierra del Fuego), Carukinka (the end of the Almirantazgo Fjord), Anika (a channel located at 54° 7 S and 70° 30 W) and Arska (the north side of the Dawson Island).

Magellan named initially the strait Todos los Santos[11] as he began the voyage through the west on 1 November 1520. Charles V, Holy Roman Emperor renamed it as Estrecho de Magallanes. Magellan named the island on the south side as Tierra del Fuego, which the Yaghan people called Onaisín in the Yaghan language. Magellan also gave the name Patagones (Big Feet) to the mainland Indians, their land was subsequently known as Patagonia.

Lighthouses in the Strait

Main article: List of lighthouses and lightvessels in Chile 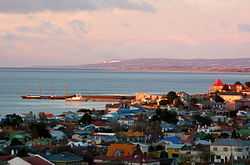 The County of Peebles and Cavenga are used as a breakwater for the harbour at Punta Arenas.

The National Geospatial-Intelligence Agency lists 41 lighthouses in the waterway. Some of them are more than a century old, and some are declared Monumento Nacional. Among the most impressive lighthouses are the County of Peebles hulk, the world's first four-masted, iron-hulled "full-rig ship", used now as a breakwater for the harbour at Punta Arenas, the San Isidro lighthouse, restored in 2004 and which is now a museum and lodge,[13] and the Evangelistas Lighthouse, located at the western mouth of the Strait and built by George Slight, who wrote on his arrival in 1934:

"I never imagined seeing something so wild and desolate as those emerging dark rocks in the middle of the raging waves. To see these stormy craggy rocks was frightening. With a dim light on the horizon we could see large waves crashing heavily in the western part of the islands: a vision that hardly anyone can imagine ... "[14]

Tidal characteristics of the Strait of Magellan

There is enormous tidal energy potential in the Strait.[16]

As the strait provides a well protected inland water way for safe navigation, sheltered from rough weather and high seas, ships sail through the strait

See also: Treaty of Peace and Friendship of 1984 between Chile and Argentina

Article 35 of the United Nations Convention on the Law of the Sea states that "Nothing in this Part affects: ... (c) the legal regime in straits in which passage is regulated in whole or in part by long-standing international conventions in force specifically relating to such straits". Article V of the Boundary treaty of 1881 between Chile and Argentina established a legal regime for the Strait of Magellan, and in a diplomatic letter to major shipping nations in 1873 Chile promised freedom of navigation through and neutrality within the strait.[19][20]