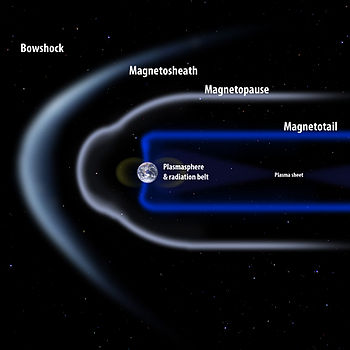 Artistic rendition of the Earth's magnetopause. The magnetopause is where the pressure from the solar wind and the planet's magnetic field are equal. The position of the Sun would be far to the left in this image 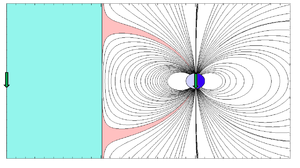 Schematic representation of a planetary dipole magnetic field in a vacuum (right side) deformed by a region of plasma with infinite conductivity. The Sun is to the left. The configuration is equivalent to an image dipole (green arrow) being placed at twice the distance from the planetary dipole to the interaction boundary.[1]

Prior to the age of space exploration, interplanetary space was considered to be a vacuum. The coincidence of the Carrington super flare and the super geomagnetic event of 1859 was evidence that plasma was ejected from the Sun during a flare event. Chapman and Ferraro [2][3][4][5] proposed that a plasma was emitted by the Sun in a burst as part of a flare event which disturbed the planet's magnetic field in a manner known as a geomagnetic storm. The collision frequency of particles in the plasma in the interplanetary medium is very low and the electrical conductivity is so high that it could be approximated to an infinite conductor. A magnetic field in a vacuum cannot penetrate a volume with infinite conductivity. Chapman and Bartels (1940)[1] illustrated this concept by postulating a plate with infinite conductivity placed on the dayside of a planet’s dipole as shown in the schematic. The field lines on the dayside are bent. At low latitudes, the magnetic field lines are pushed inward. At high latitudes, the magnetic field lines are pushed backwards and over the polar regions. The boundary between the region dominated by the planet’s magnetic field (i.e., the magnetosphere) and the plasma in the interplanetary medium is the magnetopause. The configuration equivalent to a flat, infinitely conductive plate is achieved by placing an image dipole (green arrow at left of schematic) at twice the distance from the planet’s dipole to the magnetopause along the planet-Sun line. Since the solar wind is continuously flowing outward, the magnetopause above, below and to the sides of the planet are swept backward into the geomagnetic tail as shown in the artist’s concept. The region (shown in pink in the schematic) which separates field lines from the planet which are pushed inward from those which are pushed backward over the poles is an area of weak magnetic field or day-side cusp. Solar wind particles can enter the planet’s magnetosphere through the cusp region. Because the solar wind exists at all times and not just times of solar flares, the magnetopause is a permanent feature of the space near any planet with a magnetic field.

Estimating the standoff distance to the magnetopause

are the density and velocity of the solar wind, and

B(r) is the Magnetic field strength of the planet in SI units (B in T, μ0 in H/m)

Since the dipole magnetic field strength varies with distance as

the magnetic field strength can be written as

is the planet's magnetic moment, expressed in

The distance from Earth to the subsolar magnetopause varies over time due to solar activity, but typical distances range from 6 - 15 R

Venus and Mars do not have a planetary magnetic field and do not have a magnetopause. The solar wind interacts with the planet’s atmosphere[12] and a void is created behind the planet. In the case of the Earth’s moon and other bodies without a magnetic field or atmosphere, the body’s surface interacts with the solar wind and a void is created behind the body.