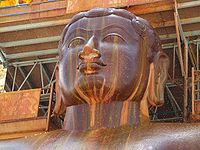 close up of the head of Gommateshvara, the 17.8 m monolith of Bahubali, ca 978–993 AD, at Shravanabelagola, India, being anointed with saffron every 12 years by thousands of devotees as part of the Mahamastakabhisheka festival, 2002.

The Mahamastakabhisheka is an important Jain festival held once every twelve years in the town of Shravanabelagola in Karnataka, India. The festival is held in veneration of a 17.3736 metres (57.000 ft) high statue of the siddha Bahubali. The anointing last took place in 2006, and the next ceremony is going to take place in 2018.[1]

As the Mahamasthakabhisheka begins, consecrated water is sprinkled onto the participants by devotees carrying 1,008 specially prepared vessels. The statue is then bathed and anointed with libations such as milk, sugarcane juice, and saffron paste, and sprinkled with powders of sandalwood, turmeric, and vermilion. Offerings are made of petals, gold and silver coins, and precious stones. Most recently, the ceremony's finale has included an enormous shower of flowers from a waiting helicopter. This event was covered live by Aastha TV.