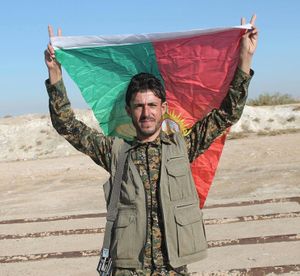 The Sinjar Resistance Units (Kurdish: Yekîneyên Berxwedana Şengalê‎; YBŞ), formerly called King Peacock (Arabic: Malik Al-Tawus‎‎), is a non-political Yazidi militia formed in Iraq in 2007 to protect the Yazidi community in Iraq and Iraqi Kurdistan in the wake of attacks by Iraqi insurgents.[4] According to chief of Ezidi Press, it is an offshoot of the pan-Kurdish Kurdistan Workers' Party (PKK).[5] It is the second largest Yazidi militia, after the Protection Force of Sinjar (HPS).[5] However, it is much more active than the Protection Force of Sinjar in fighting against ISIS.[5]

Together with its rather newly founded all-women offshoot, the Êzidxan Women's Units (YJÊ), and the formerly Peshmerga-aligned Protection Force of Sinjar (HPŞ), in October 2015 it founded the all-Yazidi joint commando umbrella structure Sinjar Alliance.

The Sinjar Resistance Units took part in the August 2014 Northern Iraq offensive, killing at least 22 ISIS fighters and destroying 5 armoured vehicles in the vicinity of the Sinjar Mountains.[1]

Hundreds of Yazidis received training from YPG instructors at the Serimli military base in Qamishli, Syria, before being sent back to the Mount Sinjar frontlines.[6] These forces were re-branded as the "Sinjar Resistance Units".[7][8]

Commander of Sinjar Resistance Units Sheikh Khairy Khedr was killed in action during the October 2014 clashes in Sinjar.[9]

There have been increased tensions between the YBS and the Kurdistan Regional Government (KRG). KRG forces largely fled Mount Sinjar when ISIS first attacked, leaving many Yazidis resentful and distrustful.[10]

In October 2015, the YBŞ participated in the foundation of the Sinjar Alliance as an all-Yazidi joint commando umbrella structure. Besides their all-women offshoot, the Êzidxan Women's Units (YJÊ), the formerly Peshmerga-aligned Protection Force of Sinjar (HPŞ)[2] and other, independent Yazidi units committed to the united Yazidi front.[11]

Under the joint command of the newly founded Sinjar Alliance, the Sinjar Resistance Units took part in the November 2015 Sinjar offensive.[12]