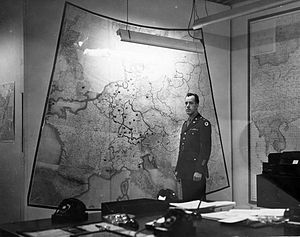 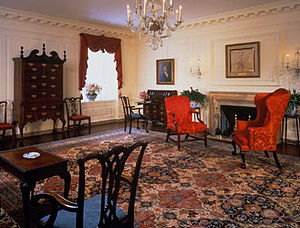 The Map Room looking southwest during the administration of Bill Clinton 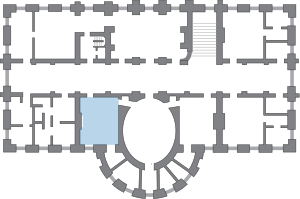 The Map Room is a room on the ground floor of the White House, the official home of the President of the United States.

The Map Room takes its name from its use during World War II, when Franklin Roosevelt used it as a situation room where maps were consulted to track the war's progress (for such purposes it was later replaced by the West Wing Situation Room). The room was originally finished as part of the extensive renovation of the White House designed by the architectural firm of McKim, Mead, and White in the administration of Theodore Roosevelt; the former basement billiard room was made into a formal space. In the Truman reconstruction of the White House (1949–1952), the room was paneled in the late Georgian style with wood sawn from the 1816 load-bearing timbers of the house. In the Kennedy administration the room was used by the newly created Curator of the White House as an office, used to catalog donations of furniture and objects. Under the leadership of First Lady Pat Nixon, working with Curator Clement Conger, the room underwent a major redecoration in 1970, transforming it from an office to the parlor which remains today. The room was redecorated again in 1994.[1]

The Map Room is furnished in the style of English cabinetmaker Thomas Chippendale and includes two stuffed-back armchairs that may have been built by Philadelphia cabinetmaker Thomas Affleck. Today the room is used for television interviews, small teas, and social gatherings.