Pierre Eugène Marcellin Berthelot (French: [bɛʁtəlo]) FRS FRSE (25 October 1827 – 18 March 1907) was a French chemist and politician noted for the Thomsen-Berthelot principle of thermochemistry. He synthesized many organic compounds from inorganic substances, providing a large amount of counterevidence to the theory of Jöns Jakob Berzelius that organic compounds required organisms in their synthesis. He is considered as one of the greatest chemists of all time. He gave all his discoveries not only to the French government but to humanity.[1]

He was born in Rue du Mouton, Paris,[2] France, the son of a doctor. After doing well at school in history and philosophy, he became a scientist. He decided with his friend, the great historian Ernest Renan, not to be educated in a "grande école" where the vast majority of intellectual were doing their education.[3]

He was an atheist but got very influenced by his wife who was Calvinist[4] (his wife came from Louis Breguet's family).[5][6]

The fundamental conception that underlay all Berthelot's chemical work was that all chemical phenomena depend on the action of physical forces which can be determined and measured. When he began his active career it was generally believed that, although some instances of the synthetic production of organic substances had been observed, on the whole organic chemistry remained an analytical science and could not become a constructive one, because the formation of the substances with which it deals required the intervention of vital activity in some shape. To this attitude he offered uncompromising opposition, and by the synthetic production of numerous hydrocarbons, natural fats, sugars and other bodies he proved that organic compounds can be formed by ordinary methods of chemical manipulation and obey the same principles as inorganic substances, thus exhibiting the "creative character in virtue of which chemistry actually realizes the abstract conceptions of its theories and classifications—a prerogative so far possessed neither by the natural nor by the historical sciences."[citation needed]

In 1863 he became a member of the Académie Nationale de Médecine; he was also awarded the Grand Cross of the Legion of Honour.

His investigations on the synthesis of organic compounds were published in numerous papers and books, including Chimie organique fondée sur la synthèse (1860) and Les Carbures d'hydrogène (1901). He stated that chemical phenomena are not governed by any peculiar laws special to themselves, but are explicable in terms of the general laws of mechanics that are in operation throughout the universe; and this view he developed, with the aid of thousands of experiments, in his Mécanique chimique (1878) and his Thermochimie (1897). This branch of study naturally conducted him to the investigation of explosives, and on the theoretical side led to the results published in his work Sur la force de la poudre et des matières explosives (1872), while in practical terms it enabled him to render important services to his country as president of the scientific defence committee during the siege of Paris (1870–1871) and subsequently as chief of the French explosives committee. He performed experiments to determine gas pressures during hydrogen explosions using a special chamber fitted with a piston, and was able to distinguish burning of mixtures of hydrogen and oxygen from true explosions. 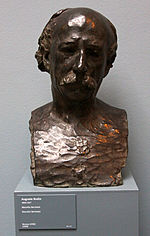 Auguste Rodin has created a bust of Berthelot.