The Margraviate of Moravia (Czech: Markrabství moravské; German: Markgrafschaft Mähren) or March of Moravia was a marcher state existing from 1182 to 1918 and one of the lands of the Bohemian Crown. It was officially administrated by a margrave in cooperation with a provincial diet. It was variously a de facto independent state, and also subject to the Duchy, later the Kingdom of Bohemia. It comprised the region called Moravia within the modern Czech Republic.

The Margraviate lay east of Bohemia proper, with an area about half that region’s size. In the north, the Sudeten Mountains, which extend to the Moravian Gate, formed the border with the Polish Duchy of Silesia, incorporated as a Bohemian crown land upon the 1335 Treaty of Trentschin. In the east and southeast, the western Carpathian Mountains separated it from present-day Slovakia. In the south, the winding Thaya River marked the border with the Duchy of Austria.

Moravians, usually considered a Czech people that speak Moravian dialects, made up the main part of the population. According to a 1910 Cisleithanian census, 27.6% identified themselves as German Moravians.[1] These ethnic Germans would later be expelled after the Second World War. Other ethnic minority groups included Poles, Roma and Slovaks.

After the early medieval Great Moravian realm had been finally defeated by the Árpád princes of Hungary in 907, what is now Slovakia was incorporated as "Upper Hungary" (Felső-Magyarország), while adjacent Moravia passed under the authority of the Duchy of Bohemia. King Otto I of Germany officially granted it to Duke Boleslaus I in turn for his support against the Hungarian forces in the 955 Battle of Lechfeld. Temporarily ruled by King Bolesław I Chrobry of Poland from 999 until 1019, Moravia was re-conquered by Duke Oldřich of Bohemia and ultimately became a land of the Crown of Saint Wenceslas held by the Přemyslid dynasty.[1]

In 1182, the Margraviate was created at the behest of Emperor Frederick Barbarossa by merger of the three Přemyslid appanage principalities of Brno, Olomouc and Znojmo, and given to Conrad II, the son of Prince Conrad of Znojmo. As heir apparent, the future King Ottokar II of Bohemia was appointed Moravian margave by his father Wenceslaus I in 1247. Along with Bohemia, Moravia was ruled by the House of Luxembourg from the extinction of the Přemyslid dynasty until 1437. Jobst, nephew of Emperor Charles IV inherited the Margraviate in 1375, ruled autonomously and was even elected King of the Romans in 1410. Shaken by the Hussite Wars, the Moravian nobles remained loyal supporters of the Luxembourg emperor Sigismund.[1]

In 1469, Moravia was occupied by the Hungarian king Matthias Corvinus, who had allied with the Catholic nobility against the rule of George of Poděbrady and had himself elected rival king of Bohemia at Olomouc. The rivalry with King Vladislaus II was settled in the 1479 Peace of Olomouc, whereby Matthias renounced the royal title but retained the rule over the Moravian lands.[2]

With the other lands of the Bohemian Crown, the Margraviate was incorporated into the Habsburg Monarchy upon the death of King Louis II in the 1526 Battle of Mohács. Moravia was ruled as a crown land within the Austrian Empire from 1804 and within Cisleithanian Austria from 1867.[3]

During the foundation of Czechoslovakia after World War I, the Margraviate was transformed into “Moravia Land”, later “Moravia-Silesia Land” in 1918. This autonomy was eliminated in 1949 by the communist government and has not been re-established since.[1] 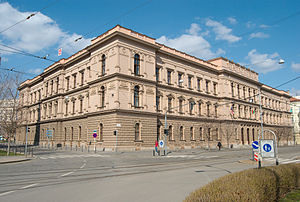 The former Moravian Diet building. It now houses the Constitutional Court of the Czech Republic.

Moravia possessed a legislature, known as the Moravian Diet. The assembly has its origins in 1288, with the Colloquium generale, or curia generalis.[4] This was a meeting of the upper nobility, knights, the Bishop of Olomouc, abbots and ambassadors from royal cities. These meetings gradually evolved into the diet.

The power of this diet waxed and waned throughout history. By the end of the Margraviate, the diet was almost powerless. The diet consisted of three estates of the realm: the estate of upper nobility, the estate of the lower nobility, and the estate of prelates and burghers.[5] With the February Patent of 1861, the diet was reformed into a more egalitarian body. It still retained the same structure, but the members changed. It consisted of assembly seats for landowners, city-dwellers, and rural farmers. This was retained until the diet was abolished after the fall of the Dual Monarchy.[5]

The coat of arms of Moravia is charged with a crowned silver-red chequered eagle with golden claws and tongue. It first appeared in the seal of Margrave Přemysl (1209-1239), a younger son of King Ottokar I of Bohemia.[2]

In the mid 14th century Emperor Charles IV, also King of Bohemia and Margrave of Moravia, established administrative divisions called kraje. Some of these subdivisions were: 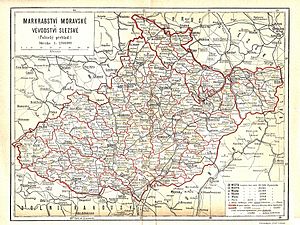 After the 1848 revolutions, the kraje were replaced by political districts (politický okres), which were largely maintained by the Czechoslovak administration after 1918:

Under the united rule of the Bohemian kings from 1611 (see List of rulers of Bohemia).