Organic compounds in the oceans

Coloured dissolved organic matter is estimated to range 20-70% of carbon content of the oceans, being higher near river outlets and lower in the open ocean.[2]

Marine life is largely similar in biochemistry to terrestrial organisms, except that they inhabit a saline environment. One consequence of their adaptation is that marine organisms are the most prolific source of halogenated organic compounds.[3]

The ocean provides special marine environments inhabited by extremophiles that thrive under unusual conditions of temperature, pressure, and darkness. Such environments include black smokers and cold seeps on the ocean floor, with entire ecosystems of organisms that have a symbiotic relationship with bacteria and hydrocarbon compounds that provided energy through a process called chemosynthesis. 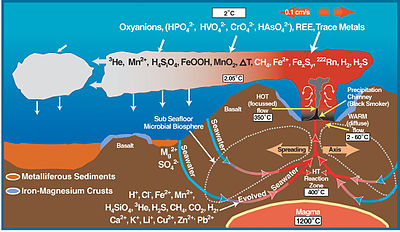 Increased carbon dioxide levels, resulting from anthropogenic factors or otherwise, have the potential to impact ocean chemistry. Global warming and changes in salinity have significant implications for ecology of marine environments.[4] One proposal suggests dumping massive amounts of lime, a base, to reverse the acidification and "increase the sea's ability to absorb carbon dioxide from the atmosphere".[5][6][7]

Marine chemistry on other planets and their moons

A planetary scientist using data from the Cassini spacecraft has been researching the marine chemistry of Saturn's moon Enceladus using geochemical models to look at changes through time.[8] The presence of salts may indicate a liquid ocean within the moon, raising the possibility of the existence of life, "or at least for the chemical precursors for organic life".[8][9]