Marine conservation activism refers to the efforts of non-governmental organizations and individuals to bring about social and political change in the area of marine conservation. Marine conservation is properly conceived as a set of management strategies for the protection and preservation of ecosystems in oceans and seas. Activists raise public awareness and support for conservation, while pushing governments and corporations to practice sound ocean management, create conservation policy, and enforce existing laws and policy through effective regulation. There are many different kinds of organizations and agencies that work toward these common goals. They all are a part of the growing movement that is ocean conservation. These organizations fight for many causes including stopping pollution, overfishing, whaling, by-catching, and Marine Protected Areas. 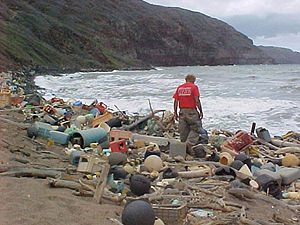 Marine debris on the Hawaiian coast

Debris along coastlines and underwater is a concern for many environmental activist organizations.[citation needed] It poses a major threat to marine life, as many animals confuse debris for prey or accidentally become entangled in it, many times suffocating to death.[1] 267 kinds of organisms are known to have been injured or killed from ingestion or entanglement.[2] The Ocean Conservancy, previously known as the Center of Marine Conservation, is an organization that fights for improvement and conservation of marine life. Among other marine issues, the group fights for the reduction of debris along coastlines and underwater. In the same year when the Coastal Zone Management, Clean Water, Marine Mammal Protection Acts passed, the Ocean Conservancy was created with the intention of promoting healthy ocean ecosystems through education and science-based activism.[3]

Established in 1986 in Texas, the International Coastal Cleanup (ICC) is a major effort[according to whom?] put forth annually by the group. The event is supported by the government-run Environmental Protection Agency, along with other shareholders. It takes place on the third Saturday of September each year. The largest of all environmental cleanups, the event has grown tremendously since the first cleanup in Texas. Beginning with only 2,800 people, picking up 124 tons of debris along 122 miles of coastline, in 2005 it drew over 158,000 people in the U.S. alone, picking up 2,000 tons of trash. Since 1989 the event has gone international and in 2005 over 300,000 volunteers showed up in 88 different countries, collecting 4,000 tons of litter.[4] The event itself both cleans up the coastline and oceans and provides detailed information on the types of debris. The results are used for reports on the state of the marine life. It is also used for education of the public about debris issues and to influence positive changes on all scales, both local and international.[5] 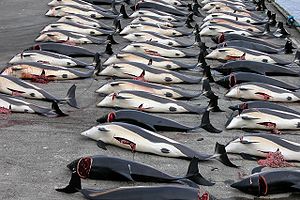 Whaling in the Faroe Islands.

Whaling is the hunting of free roaming whales. It has become a high-profile issue in marine conservation activism as it has led to the endangerment of 5 out of the 13 kinds of whales. The International Whaling Commission (IWC) had instituted a whaling moratorium in order to give whales time to recover. According to environmental groups, however, blue whales have not recovered.[6] Other whale populations have been drastically depleted.

The IWC does not include three countries who ignore the moratorium and continue their whaling practices: Japan, Iceland and Norway.[7] 20 years after the moratorium, the whale is again at risk of further endangerment.[7] Greenpeace, an international environmental organization founded in 1971 in British Columbia, fights against whaling. Their campaigns are nonviolent and many times involve one or more of the five Greenpeace ships which first made the organization famous in the 1970s. In late December 2005, Japanese whaling fleets experienced heavy opposition from Greenpeace, who protested that the Japanese were continuing their commercial whaling under the guise of research,[8] and even worse, they were doing so in the Southern Ocean Whale Sanctuary. They sent volunteer workers in inflatable boats to get in the line of fire in order to stop the whaling.[7]

The Sea Shepherd Conservation Society is an environmental group that does not agree with the passive approach which other activists use. President of Sea Shepherd is Captain Paul Watson, a significant figure in the environmental and animal rights movements. He was a co-founder of Greenpeace (although this is disputed by Greenpeace, which acknowledges that he was an early member[9]) but later left because of disagreements on tactics and with the emerging bureaucratic structure of the organization. Sea Shepherd uses a more intense, forced compliance strategy than what Greenpeace uses in the fight against whaling. They have been known to sink ships, destroy fishing nets, and splashing butyric acid, a harmless chemical substance with a pH-value of 4.8 commonly known as stink bomb, at Japanese whaling vessels. While Sea Shepherd's actions are controversial, their extreme methods of direct action serve to raise public awareness and support.[10] In doing so, they refer to the United Nations World Charter for Nature that even calls on individuals to "safeguard and conserve nature in areas beyond national jurisdiction". The International Whaling Commission no longer supports the group because of their extreme acts. Because of their beliefs and activities, Sea Shepherd has been characterized as "an aggressive, controversial, publicity-hungry environmental group that physically assaults whaling ships, and has been accused of eco-terrorism by both the Japanese government and Greenpeace." [11] However, Sea Shepherd claims to be the only organization able to effectively prevent whaling.[12] In 2008 Animal Planet began filming the weekly cable-TV series Whale Wars based on these encounters. The show continues to spotlight Sea Shepherd's anti-whaling activities.[13]

Pro-whaling nations argue that basing their views on moral judgements and not scientific fact violates the international rule of law.[14] Japan and Norway, two pro-whaling nations maintain they limit catches to sustainable levels. Japan also believes the whaling ban is no longer needed and wants the IWC to stop protecting whales and start regulating the recovering whale stocks.[15] Both countries are unhappy with the way the United States and its allies apply sanctions against them in attempts to stop whaling. They argue that other nations and organizations need to recognize the difference in culture and its relation to the whaling industry.[14]

Even though the idea of Marine Protected Areas is an internationally known concept, there is no one term used internationally. Rather, each country has its own name for the areas. Marine Reserves, Specially Protected Areas, Marine Park all relate to this concept, though differ slightly. Some of the most famous Marine Protected Areas are the Ligurian Sea Cetacean Sanctuary along the coasts of Spain, Monaco, and Italy, and Australia's Great Barrier Reef. The largest sanctuary in the world is the Northwestern Hawaiian Islands National Monument. The purpose of these sanctuaries is to provide protection for the living and non- living resources of the oceans and seas. They are created to save species, nursing resources and to help sustain the fish population.

The activists at the Ocean Conservancy fight for this cause. They believe that the United States should put forth a consistent and firm commitment in using Marine Protected Areas as a management strategy. Currently, the argument in the United States is whether or not they are necessary, when it should be how can they work the most efficiently.[16] Activists at the Ocean Conservancy have been working on a campaign called the Save Our Ocean Legacy, a campaign lasting several years trying to establish Marine Protected Areas' off of the California coasts. 29 Marine Protected Areas were planned to be established when the legislation bill passed in 1999. The hope is that the plan will be finalized in 2007.[17]

Some fishers do not accept that Marine Protected Areas (MPA) benefit fish stocks and provide insurance against stock collapse. MPAs can cause a short-term loss in fisheries production.[18] However, the concept of spillover, where fish within a Marine Protected Areas (MPAs) move into fished areas, thus benefiting fisheries, has been misunderstood by some fishers.[19] The term is a simplification of numerous ecological benefits that are derived from removing fishing from nursery, breeding grounds and essential fish habitats.[20]