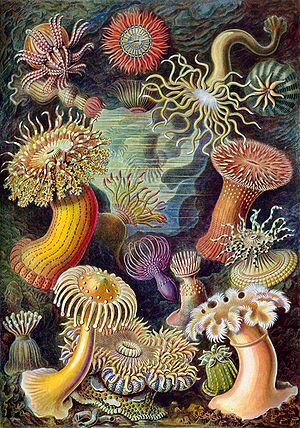 Marine invertebrates are all multicellular animals that inhabit a marine environment apart from the vertebrate members of the chordate phylum; invertebrates, lack a vertebral column. Some have evolved a shell or a hard exoskeleton.

As on land and in the air, invertebrates make up a great majority of all macroscopic life, as the vertebrates makes up a subphylum of one of over 30 known animal phyla, making the term almost meaningless for taxonomic purpose. Invertebrate sea life includes the following groups, some of which are phyla: 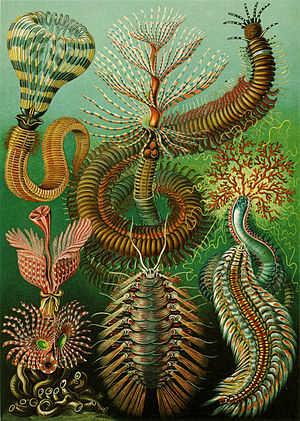 There are a number of marine invertebrates that use minerals that are present in the sea in such minute quantities that they were undetectable until the advent of spectroscopy. Vanadium is concentrated by some tunicates for use in their blood cells to a level ten million times that of the surrounding seawater.[1] Other tunicates similarly concentrate niobium and tantalum.[1] Lobsters use copper in their respiratory pigment hemocyanin, despite the proportion of this metal in seawater being minute.[2] Although these elements are present in vast quantities in the ocean, their extraction by man is not economic.[3]