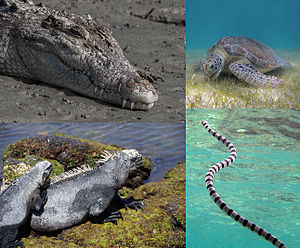 reptiles that lving in the sea 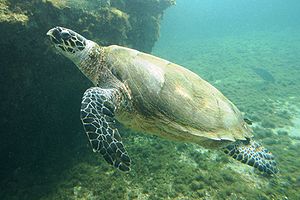 Marine reptiles are reptiles which have become secondarily adapted for an aquatic or semi-aquatic life in a marine environment.

The earliest marine reptiles arose in the Permian period during the Paleozoic era. During the Mesozoic era, many groups of reptiles became adapted to life in the seas, including such familiar clades as the ichthyosaurs, plesiosaurs (these two orders were once thought united in the group "Enaliosauria,"[1] a classification now cladistically obsolete), mosasaurs, nothosaurs, placodonts, sea turtles, thalattosaurs and thalattosuchians. After the mass extinction at the end of the Cretaceous period, marine reptiles were less numerous.

Currently, of the approximately 12,000 extant reptile species and sub-species, only about 100 of are classed as marine reptiles: extant marine reptiles include marine iguanas, sea snakes, sea turtles and saltwater crocodiles.[2] The Murua gharial was yet another example of a fully marine reptile, that became extinct rather recently.